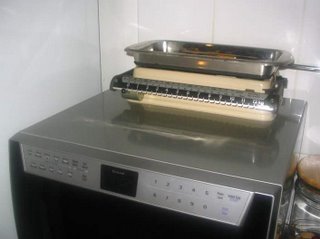 These scales are quite old and unlike spring models, they are still dead accurate. Unfortunately they are also dead ugly. I keep looking for some new electronic scales but I just want them to be ten dollars cheaper. Nice ones can be had for around $50.

See the time on the microwave? No? Neither can we. A couple of months after we bought the unit, the display failed. If we look very closely, we can make out enough to read it, just. It came from a Target store and was a real bargain. But when we took it to the repair place in North Melbourne to have it fixed under warranty, they told us it had no serial number and therefore could not be repaired. They advised us to go back to the vendor, but we bought it in Box Hill and we rarely go there. Over the phone Target offered to replace it if we returned it, but such a long way to drive. We decided to live with it. Wonder how Target ended up with microwaves without serial numbers?
Posted by Andrew at 8:47 pm