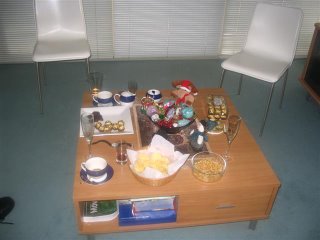 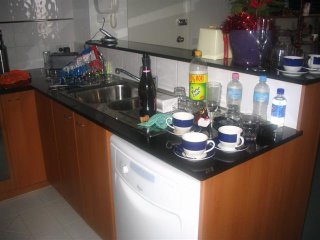 I think this may be the way of the future for Highriser. No partying till the mid New Year morning, no party at a friend’s house, no standing bored in bars waiting for the clock to strike midnight and we can go home. No sitting around pretending we are having fun at a barbecue, but wondering why we came early and not at 11pm.

No-one was doing anything about organising NYE, so I took on the task. It was military timing, as I did not get home from work until 18.30.

Shower, change and leave home at 18.50 with R and six friends. Wait nearly ten minutes for a tram. Should be one every couple of minutes. Get kicked off tram at Art’s Centre as they could proceed no further due to the crowds. Walk with the crowds to Little Bourke Street and bang on the booked time of 19.30 arrive at Little Lemon Bistro.

Service is usually fast, but tonight the place was packed and we did have to wait a while for our food. There was no compromise on the food though. Tres excellent.

Depart restaurant at 20.50. Walk down Russell Street and down some car park stairs to Birrarung Marr.

Find viewing position midway between the two firework barges and at 21.17 the kiddies fireworks started.

Highriser is very used to seeing fireworks from his windows, but there is nothing like being there and seeing them close up, hearing the noise, hearing the cheers, ohs and ahs and smelling the burning gunpowder.

21.25 start a shuffle along with hundreds of others along the Yarra Riverbank to Princes Bridge and elbow babies and old people out of the way to board a tram. I am grateful to the nice looking young man who took off his jumper and his tee shirt lifted up to reveal his tight brown torso a mere centimetre or two away. Bah to his moll who accidentally slipped her fingers inside my shirt and touched my stomach as she slipped her protective arm around him.

Arrive home at 22.00, a little earlier than planned but as you can see in the pics (it was worse that it looks in the photos), we managed to pass the time until the tele went on at 23.45 to see the midnight fireworks.

Then our own personal fireworks show started that we had no idea was going to happen. They were just as good as the early city fireworks. Thanks The Point and Carousel at Albert Park Lake.

Guests seen off and in bed by 01.00. Pity about the mess this morning, but I am off to work. I will leave it for R to deal with.