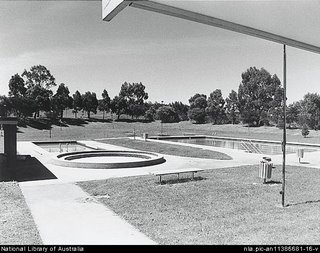 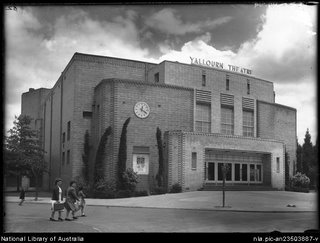 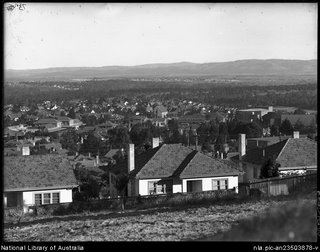 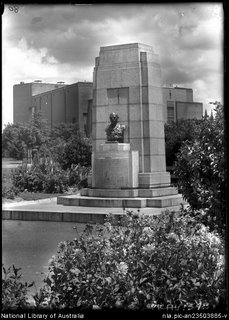 Ben was right on the mark with his suggestion that the town I wrote about had something to do with open cut coal mining.

The town referred to in the previous post was Yallourn (Yalorn) in the Latrobe Valley, Gippsland. I visited it more than once as a teen and I certainly went to the theatre but I am not sure if that building was also the picture theatre that I visited more than once.

Here is a clip that says it better than I can.

The town was planned, built and owned by the State Electricity Commission of Victoria, whose aim was to secure a contented workforce by providing ideal living conditions. When Yallourn was no longer essential for the SEC, the town was demolished to make way for the coal deposits that lay under it.

What I did forget about was the coal dust, which was a problem in many close by towns. Note is one of the links that it states that the SEC towards the end of the town's life used to visit each house and vacuum the coal dust from the ceiling spaces.

To my knowledge, the SEC never built another town or house and the task of supplying reasonable housing for the SEC workers and other folk in the area went to the State Housing Commission.

Here are a couple of links for further information and there has been a history of the town written and I have checked that it is available at the City Library. I will borrow it soon.

and a house biography.

Pics are a view of the town, the theatre, the pool and a bust of Sir John Monash.

Let me describe what was a beautiful town.

Mostly two storey houses lined the streets that curved up and down the hills. Mature but still young deciduous trees shaded the winding streets. The streets all ran towards a central point, the town centre. As they neared the centre of town, the streets widened along with expanses of neatly mowed grass. The town centre was a square, just for people but still with good car access. The flower beds were meticulously maintained. The lack of any large retailers meant the shopping area had a very village like feel to it.

The picture theatre was opulent and had a luxurious feel to it.

The open swimming pool had huge sloping grassed banks for sunbathers to lie on (and perve from), but also with plenty of trees for shade.

It was a very pretty town, without anything very new, but nor anything very old. There was no history to it. It had a very good and well used local bus service.

It was a planned town and it showed just how good a planned town can be. Given our suburban sprawl housing estates, it seems we have gone backwards since then. The developer paid for all the public amenity. The housing, the streets, the shops, the library, the picture theatre, the primary school, the kidergarten, the infant welfare, the police station, the bus service, the lot. The developer created a complete township, not just housing.

Did you note my use of past tense? I believe it has been demolished now. It served it's purpose. Any idea of where I am talking about?
Posted by Andrew at 12:22 pm 3 comments:

You would not read about it

It is not often in this world that I am gobsmacked, but I am.

Although our building residents are comprised of half Asian/Indian, it is only long term older Anglo Saxon residents who participate in the running of the building. There are a couple of exceptions. There are a couple of people of Southern European heritage, one is a paticularly important person in that he is younger and has skillfully worked himself into a position of importance. Created his own posistion even, Secretary. We have never had one of those before. But he is good. Totally devoted to the building, that is, our home. No problem with him at all.

Big problem last night with someone who was moving in and had not finished by the required time. Move ins have to be finished by four pm. There are good reasons for this. Ask me if you really want to know. They were not finished by 4. Novice building manager called body corp manager to ask what to do, and she approved it, the Frog Canadian person. OK, she wears it.

This person moving in had, in such a brief time, managed to call an influential body corp person, a fat old cow with a stunted growth friend. Stunted growth friend is another body corp committee person who lived in the building before hot water was turned on. Wrong people to put offside.

Did they get off on the wrong foot or what?

Usual stuff, so what gobsmacked me, or us?

Well, we know these two guys who caused the problem quite well. One is a mate of Brighton Antique dealer and they have brunch every Thursday before Joel's auction and the other is his boyfriend, a quite nice Indian from Malaysia. We have known Brighton Antinque Dealer's friend for quite some time and it is safe to say that we have never connected well with him. There was even a 'common UK relatives' dinner a few years ago. I am not so bad at overlooking peoples faults and rudeness, forgive and forget, but cross R, you make an enemy. We had no idea they were moving here.

Ah, well. It is a large building and you can miss running into people for a long time, hopefully.

I have to wonder WTF would they want to live here, in a back apartment with a view of the building behind and pay around $400 a week for the priviledge?
Posted by Andrew at 10:59 pm No comments:

Chinook helicopters arrived to remove Americans from Lebanon. An Italian ship arrives to remove their folk. UK has sent two ships with four more to follow. Canada sent a ship for their people. We Aussies have the same number of our citizens in Lebanon as does the UK. How are we getting them out?

Well, since we were gazumped on our modest Turkish ferry booking, we are begging favours from UK and Canada to get our citizens out on their ships.

We cannot even bring dead soldiers home from a war zone without horrendous mistakes and stuffed up investigations, let alone get live people out of Lebanon.

Thanks Howard for reminding us of our place in the big picture.

Shallow queen that I am, it is all about appearances and it does not appear well.

I am embarrassed to be an Australian.
Posted by Andrew at 9:34 pm 1 comment:

Now that the Greens have got that messy busininess of drugs and the Herald Sun out of the way, they can only go on to greater success. Next step, watch out for State Premier Bracks smooching up to them, but not in front of the punters of course. You'll have to read about it somewhere.

Sadly, I don't see Bracks and his government as the enemy. They are merely incompetent and, naturally, politicians.

The real enemy is the Federal Tory government, headed by the least progressive and most reactive PM I have seen in my lifetime. A few Green Senators and a couple of members in the House of Reps would be so so good. Make it happen readers.
Posted by Andrew at 9:14 pm No comments:

Right back from my early teens I have never slept well on a Sunday night. It used to be because I would sleep in Sunday morning, but I don't do that anymore.

In my twenties and thirties, I either blamed having Asian food on a Sunday night or a roast. What do they have in common? Onions. Many Asian dishes have onions and a roast usually had a roasted onion. Onions don't agree with many people and I thought I was one of the them.

I had a schocker of a night last night. I would wake initially every half hour, bathed in sweat and unbearably hot. I would pull the bedcovers back, cool down and go back to sleep. This happened perhaps six times. About three I finally settled down and slept properly.

In the time I was awake, I tried to work out why. Ok, it is obviouslyan allergic reaction to something. We had a lovely roast lamb, cooked by R, but no onion, so that can't be it. Nothing else different during the day. How can I connect a meal of roast lamb to Asian food and it not be onion?

What was different about last night's roast? Well, there was a mishap with the mint sauce and it seemed foolish to eat mint sauce containing glass. So, I had extra, extra gravy.

I can only conclude that there is something in gravy, Gavox actually, that is also found in Asian, especially Chinese, food and my system does not like it all.

I will do some research. I am sure that there is plenty on the net about food allergies.
Posted by Andrew at 12:14 pm 4 comments: 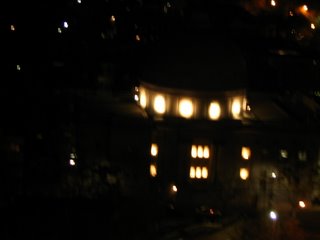 Is it lighting for an Israeli victory over Palestine and Lebanon?
Is it a Jewish holiday or celebration?
Is it to mark the trouble in the Middle East and hope for a quick resolution?
Did someone just forget to turn them off?

The lights at the synagogue have been on all weekend, day and night.
Posted by Andrew at 7:24 pm 1 comment:

Andrew
Melbourne, Victoria, Australia
I live in a highrise apartment building in inner Melbourne, Australia on black fella Boon Wurrung land with my male partner of 42 years.. My interests are varied but top of the list are old buildings, history and public transport. I love blogging and blogmates along with connections with people. My email is andrewhighriser at gmail.com