If you have a short sleeved black shirt with flames of fire licking up from the squared off bottom, can you please chuck the old rag out. You don't look great in it at all and it certainly dates you.
Posted by Andrew at 10:48 pm 1 comment:

Off to Sin City for a few days. While there I will have the most expensive meal I have ever had in my life, probably around $100 including drinks, but I will be entertained and be staring out at the Oprey House and that funny old bridgy thing. Probably won't post anything. Don't miss me too much. For some reason a huge number of hits to my blog today, Wednesday. I must have mentioned sex or something similar. I am sure they were disappointed. Ciao for now folks.
Posted by Andrew at 9:59 pm No comments:

Last night was the photo night where we dragged out all the photos to show the o/s rels. What struck me after a while was how many people in them were dead. A couple of them from HIV, a couple of suicides, a car accident, cancer and of course cats and dogs. None really from old age. That is yet to come.

It is good to have their images preserved and remember them, albeit a little sadly.
Posted by Andrew at 3:34 pm 1 comment:

I have heard that there are plans afoot for some improvement in Melbourne's tram system.

I am trying to recall any real improvment in the last almost thirty years and I am scratching my head. Air con and heating I suppose. But actual service improvements......still scratching my head. Better Sunday services is one. Later services too, but then these are almost exclusively used by opportunistic travellers, that is, they see a tram and get on it. There are very few people who actually wait for a late night tram.

The latest work on traffic lights has been good, but so few have been done, it makes such a small difference.

Nope, out of ideas. All that really sticks in my mind is cuts to frequency. Suggest some improvements if you like but the cuts to frequency has been a killer. It has reduced the flexibility that you have when you have many trams not too far apart.

Anyway, what was the enemy, VicRoads, has become a friend of the trams. Perhaps they have realized that the better the trams move, the better cars move. Practically, it is political.
VicRoads have a lot of control over traffic lights. For the first time, this year 'No Right Turn' lights at some intersections were turned off on the public weekday holidays. I am quite sure that they did not send someone to switch it off in the box. It was done remotely. But I don't think they have full control of all intersections remotely, yet. They could certainly do a lot better maintaining the systems that don't work that are already in place to assist trams.

Here is the plan. If a tram is late, it will get priority at traffic lights. The later the tram is, the greater the priority. Sounds pretty good hey? Think it through. What is the major cause of tram delays? Traffic congestion in major shopping areas.

Take the road that I once heard described as the 'longest stretch of bible bashers in the world', aka Burke Road Camberwell/Hawthorn. Camberwell Junction is a significant place where trams are delayed due to traffic congestion. What could have been done years ago still has not. That is to insert a tram phase in the three phase traffic lights. So many simple and inexpensive things could be done all over the system to make it work better and faster.

The problem I see in greater priority for a late tram is the delaying effect on trams in the opposite direction. Can we trust VicRoads and the tram company to get it right? Not if you go by the farce of Toorak Road where hundreds of thousands were spent on a system that barely made a difference and is now totally ignored, including by VicRoads maintainance
Posted by Andrew at 3:42 am 1 comment:

While my ever so ocker brother can be hopeless at times, he can also be quite amusing.

This evening when we went to a most wonderful barbeque at his place in the monocultural Langwarrin, we were greeted by a front garden view of a three metre tall steel post with a motor car exhasut tail pipe sitting on the top. Not a bad crude art attempt.

(I can never hear the name Langwarrin without remembering a Martin Boyd book. 'So why are you moving to the swamps of Langwarrin?" Said to Joan Lindsay of Picnic at Hanging Rock fame, I think.)

Barbeque against fence with three leeks jammed into the palings as decoration. I warned all not to ask him why the leeks are on the fence.

He got out the half forty four gallon drum, 205 litres for you kiddies, and lit a fire and then proceeded to burn his son's woodwork project of a few years ago, a very large shoe box. A deck chair was to be the next, but I convinced him that the chair was still ok. It was a cool evening and the fire was most welcome though.

Then he lit his back yard with a very odd lamp. Kinda a static heavens facing search light. The longer it was on, the brighter it became. He was quite amused by my comments about his 'mood lighting' and he would be better off uplighting the tree, rather than the basketball hoop.

But his 'piece de resistance' must be his pole. (no naughty thoughts faggots). It was 2 metres tall, painted white with a blue band a the top and some notches cut into it that were highlighted in black and it was jammed into a garden bed. 'What is that for E?' is the obvious question.

Well if you did not know him well enough, you would ask that, and then your name was scribed onto the post as the idiot who asked. Yeah, I did.
Posted by Andrew at 8:54 pm No comments:

Husband to wife: 'I took you out for brunch in my time.
What more do you want. I could have been enjoying myself.'
Posted by Andrew at 1:55 am No comments: 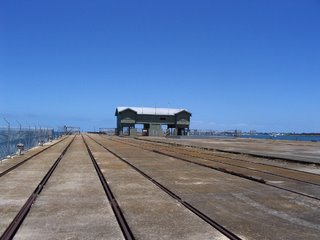 Lunch at Beacon Cove. Nice lunch, warm sun, cool breeze, not too busy, lovely. Afterewards we walked west along the newly opened beach walkway and took some photos. Here is Princes Pier. It is fenced off to the public as it is unsafe but one fisherman managed to get out onto it.

I have heard that there are plans to build apartments on the Pier, similar to Sydney's Finger Wharf, although the local residents have fought against it as some will have their views spoilt. Click the pic for the full size and note the that the structure on the pier is almost identical to the one on Station Pier.
Posted by Andrew at 3:33 pm No comments:

Happy new year to all.

While my friends and family partied, I worked. The less said about that farce the better. At midnight I was in a very quiet and lonely place and celebrated by eating a shortbread biscuit and listened to distant fireworks. A few texts arrived to my phone and I sent a few. Everyone was still up when I arrived home and after a drink or two, bed blissful bed.
Posted by Andrew at 9:06 am No comments: