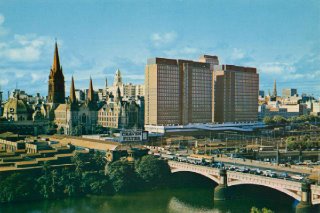 (Thanks for this one Jess) Melbourne's Federation Square is as loved as it is hated. I like it, without being overboard about it.

I like the earthy pink tones and the undulations of the paving. Very fine for people fleet of foot, but not great for oldies or disabled. The interior is excellent and the contents varied and interesting. I love sitting in or just out of the Transport Bar and watching the world go by. One view is people and the passing parade of trams, another is the river its riverside walkway and then there is another position where you can watch Fed Square itself and the tall city buildings in the background.

Even its critics conceed Fed Square works well for large gatherings of people, be it rallies, stage performances, buskers or looking at a sporting event or similar on the big screen.

Before Fed Square it was a railway station at the base, the hated Princes Bridge Station, with a bare rooftop where naughty teenagers would gather in large mobs. This was roughly where the lower part is along with the information booth area. The information booth is a 'shard' and there were supposed to be two, but one was knocked back through public pressure as it would have blocked the view of St Pauls from the south. The architects still complain that not building the second shard ruined the design. I reckon building the one shard spoilt it.

As Jah Teh said, to the east a bit were the glorious brown brick Gas and Fuel buildings. As you can see in the picture, they really added something to the city and blended in to their surrounds beautifully. Their demolition is one of the few things I feel I can thank previous Premier Jeff Kennett for.

Pic is from Walking Melbourne, but it's original source is not known to me.
Posted by Andrew at 6:39 pm