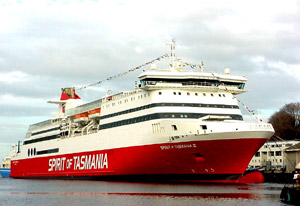 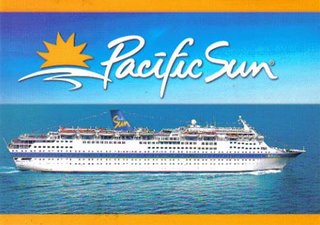 R is going on a cruise next year. It is work related and it will be hard work, but still, nice work if you can get it. A neighbour is also going on a cruise to New Zealand toward the end of this month. I am a little curious about cruises. I would get bored on a long one I think, but a short one might be ok.

There was a curious looking ship sitting in the bay on Saturday. It had two huge vertical steel structures on either side of the ship and not much in between. No idea what it was or for, but I though I might find a clue at Melbourne’s port authority site. Alas, it was down for maintenance, but the cruise schedule was still working, so I checked when the first of the cruise liners will arrive for the season, and it was the Pacific Sun. The ship R will be travelling on is the Pacific Sun.

I took a look at P&O ships site and noted it was about to depart Sydney at 4pm last Saturday for Melbourne. Ah, their ships have webcams. I checked and there wasn’t any sign of life on the bow deck. Then a bloke with a red tee appeared, then a woman in white shorts. Departure is imminent.

It departed Wharf 8 just outside Darling Harbour. I watched it pull away from the wharf. I then switched to my favourite webcam at the Rocks and took control of the camera and watched it pass under the Sydney Harbour Bridge. Then with the Canon webcam in the city, I watched it pass by the Opera House. It was really quite exciting. We had to go out then, or I would have been hunting around for webcams at the Heads to watch it pass into open sea.

It was due into Station Pier at 8am this morning but I know they are often early into port. I was up at six and getting ready for work, so I kept checking the horizon. I could see a smudge, checked the time, and no, that will only be the Spirit of Tasmania. I checked the webcam on the Pacific Sun, and there was the Spirit travelling just in front of the Sun. Sure enough, it too appeared on the horizon just behind the Spirit.

The Pacific Sun did not look any bigger than the Spirit and the Spirit being red and white looked more dominant. I had to go to work before they came close enough to take a picture.

It is due to depart on Tuesday at 7pm and I should be home to watch it leave. I think the purpose of the cruise was to bring Sydney horsey types to Melbourne for the Melbourne Cup. I reckon it would be a nice thing to do, although I am not sure about going on a ship after having a gutsfull of grog at the Cup. Heave ho.