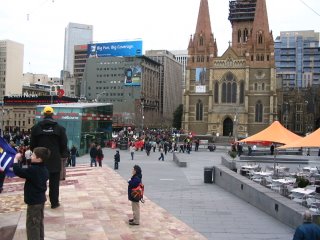 Underdressed for the cold, we hovered around Fed Square waiting for the march to begin. I had no intention of standing around listening to speeches. I just wanted to be counted as a number who participated in a protest against the new industrial relations laws being introduced by the government.

Interestingly, and I include myself, most of the marchers were workers who will be least affected in the short term by the new laws. Nearly all would be workers in heavily unionised jobs and will probably be the last to suffer.

I was also marching on behalf of those less than bright people who don't think that it is being worthwhile being in a union, your shop assistant, waiter, cleaner etc. They have started suffering already.

I reckoned too that it was a good opportunity to instill some social conscience and politics into the niece's head, presently full of thoughts of boys and music, and boys and clothes, and boys and appearance. Her father won't be impressed. Tough.

To be surrounded by so many people who think along similar lines as yourself is a wonderful thing. It gave me a good understanding of how political rallies can work.

So we marched and only reached Collins Street before it all came to a standstill. Loudspeakers lined the street and it reminded me of Vietnam with propaganda and patriotic music coming from speakers, all day, every day, I recall in Nah Trang.

Listened to speeches for a few minutes and then adjourned to a take away chicken shop for a feed.

Then back to Fed Square and went to a wonderful ACMI exhibition of 50 years of Australian television. I could have stayed all day watching old tv shows and looking at old tvs. We left after about an hour and half. Fortunately there was some more recent stuff in the exhibit along with some computer based exhibits, so even the niece found it entertaining. I highly recommend it.
Posted by Andrew at 8:32 am