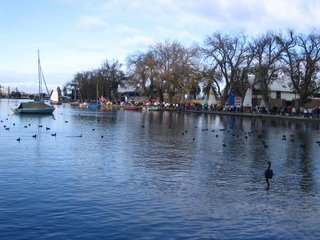 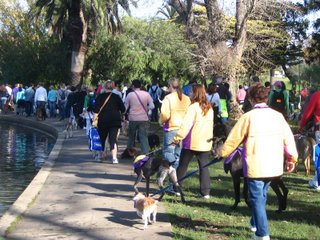 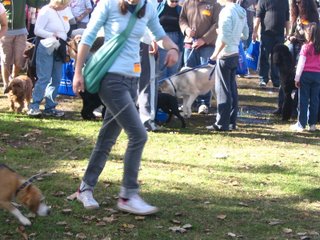 Sob, sob. I love dogs but I don't have one to walk. What better to do than enjoy dogs' company at RSPCA's fundraiser, Million Paws Walk. A few thousand of them, along with their owners, circle Albert Park Lake.

Some brief unofficial stats. West Highland White Terriers were in the greatest number. We were fashionable having one before they were fashionable. Samoyeds are out of fashion, as are Aierdales. Breeds behaved as expected with the right dogs showing interest in the bird life in the water. One showed exceessive interest and jumped in. Most just ignored the wildlife. Many dogs pulled hard on their leashes. Bad training makes hard work for the the walker. Maybe by the time the dogs reached where we were, they were 'empty', but not one bit of anything was on our shoes. We did not see one squabble or cross word between dogs.

While there is nothing to stop anyone walking with their dog, by far the majority had evidence of having paid the $17 registration fee.

The last pic does not quite show the huge drinking container. It had a hose running constantly into it, such was their thirst. Click the pics for a better view.
Posted by Andrew at 4:29 pm