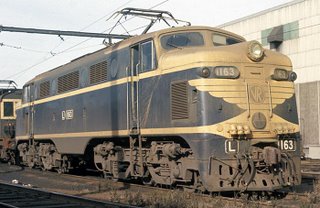 When I was a teen and sometimes caught a train from Gippsland to Melbourne, it was probably hauled by a beast similar to this. Sometimes there would be compartment and sometimes just rows of seats. I am not sure why. It was an electric train. I was surprised to learn not long ago that the line is now diesel electric. Something to do with the cost of buying new electric trains just for this line, as it was unusual for a country line to be electric.

On cold days there would be lead foot warmers. The more the train rocked and rolled, the more the chemicals mixed and the hotter they became. I can also remember light fittings with two globes in them, I suppose in case one went out, there would still be one burning. There was the dirty rusty communication cord, a chain. I wondered if pulling it would have the result like seen in the movies, a screeching of metal on metal as the wheels locked. It was well after dollars and cents started but the threat for misuse of the cord was £5 I think.