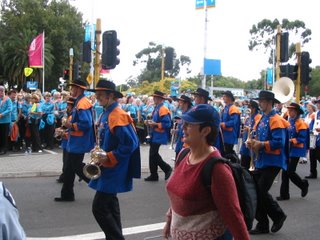 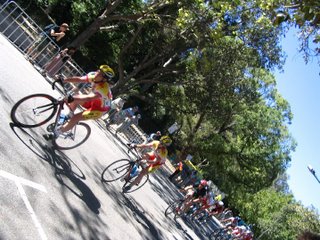 Actually, I am bit fed up with the self congratulations that Melbourne is pouring upon itself. Of course we did well. What else would any one expect?

I am not a sporty person. I know which end of the raquet to us to hit a tennis ball or a squash ball, but that is as far as my personal sporting activity extends and am not really interested in watching sport.

But I did particpate a bit in the games. We saw the baton being passed, watched the marathon runners go past and yesterday, the last day, we went and watched the cycling for a bit. I looked at the course online and wow, they had to go up the Punt Road hill and the Anderson Street hill in South Yarra. But I was puzzled? Why does it take so long. Even I could ride the course in the time allowed. I investigated further and discovered that the women do nine circuits of the course and the men fifteen. I am truly impressed.

Punt Road closed. Must have caused chaos. Doubt that will ever happen again.

While most riders were in a bunch, some were on their own, presumably fallen back. They looked to be a lot slower than the leaders, but good on them. They did far better than you or I would. They went a bit fast to notice whether any were really hot and being hunched over their bikes meant they did not display themselves well.

The fish on the Yarra was inspired. I won't forget them in a hurry. Somehow, I don't think they would work well if not in a long line though. Maybe.

I did not think much of the closing ceremony. A few old has been performers. The fireworks were ok though. While we were watching the fireworks on tv, we could see them reflecting in a glass building to our south.

Today I went to cheer the volunteers, well not really cheer them. The Brighton antique dealer's toy boy was one, so I thought I would go and have a look. Yeah, good, nice.

Nice to have Melbourne getting back to normal.......oh, yeah that bloody car race is next weekend.
Posted by Andrew at 8:33 pm