Nearly in the cemetery 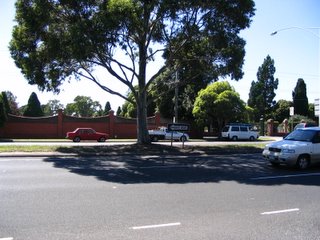 I was a bit concerned about walking along this wall at Brighton Cemetery. It was where a Melbourne underworld criminal was about to be shot and killed in gang warfare somewhat over a year ago.

But of course the real danger was in the simplest thing, like getting off the tram at the corner of North Road and Hawthorn Road.

One car flew past the stationary tram and another almost did but came to a rapid stop with a squeal of tyres, smoke and the smell of burning rubber. It was actually too late as the nose of the car was level with the nose of the tram. I 'accidently' banged my bag into the side of of offending car as I alighted.

It is a dangerous place for tram passengers. Anywhere where there are two lanes of traffic plus a tram lane is dangerous. If there is enough room for three lanes in total, then there should be enough room for a tram safety zone. Other similarly bad locations are Toorak Road and Park Street heading west and Toorak Road and Chapel St heading both east and south and Chapel Street and Dandenong Road heading south is not too crash hot either.

Before the days of an extensive number of safety zones outside of the city, people knew better about stopping for tram passengers. Safety zones are kinda good, but they do breed complacency and pass the onus onto those using the tram, rather than the motorist who needs to interact with the tram and it's passengers.

What would the penalty be for running over and killing a person as they were alighting from a tram? The last I can recall happened in Burke Road, Camberwell. The driver received a short license suspension and a reasonable fine.
Posted by Andrew at 12:00 pm