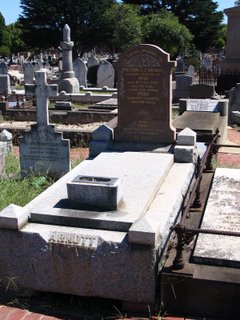 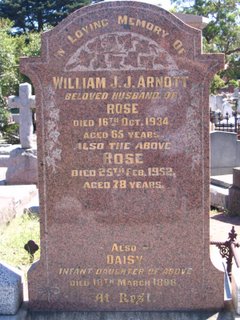 I have been meaning to visit Brighton Cemetery for a while to take some pics. The grave is that of my maternal great grandparents. William was a nice and kind gentle man who lived his last at my grandmother's house in Clarinda. Rose was an absolute tyrant and treated my grandmother very badly and my mother was terrified of her. On her deathbed she was still issuing orders and threats. My grandmother was a slave for her parents and brothers.

Daisy, great grand parents' daughter died only a few months old and I have forgotten the cause now. She was one of thirteen children. My late grandmother was somewhere in the middle. Two of her sisters survive. One is over ninety and has dementia and is well looked after in a nursing home in Roweville. The other, the youngest has a very nice house high on the hill in Berwick.

The great grand parents home and land was bought by the government to build Monash University. An area next to Dandenong Road was excised and sold to the husband of the daughter who now lives in Berwick. It was a beautiful four bedroom triple fronted cream brick veneer built on the hill just west of Wellington Road. He subsequently subdivided the land.

Note in pic some dead flower stems in the flower receptacle. I expect they were put there by my great aunt from Berwick .
Posted by Andrew at 8:46 pm