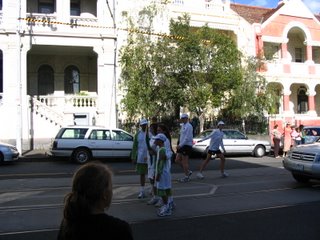 Commonwealth Games. Ha, what commonwealth. We must have some of poorest countries in the world here in Melbourne at the moment. Not really common wealth is it. Spoiling our public transport, congesting roads, altering daylight saving and school holidays, never mind work......all such a botheration.

But this evening we walked up to Park Street, South Yarra and watched the change over of the baton. Ok, I wasn't forced, it was my idea. Jane Di Nardo passed it on to Susannah King who, along with her young Aussie/Asian running mate, took off towards The Tan.

I will never see this kind of thing again. I am pleased to have seen it today. I am also really chuffed at how country Victoria especially, has taken on poor Commonwealth nations and made a fuss of them.

Long live the Empire. The sun may have set, but there is still a glow on the horizon.
Posted by Andrew at 8:55 pm