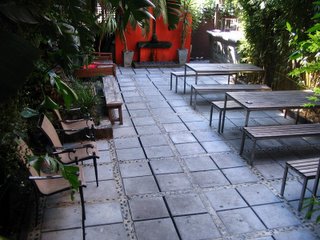 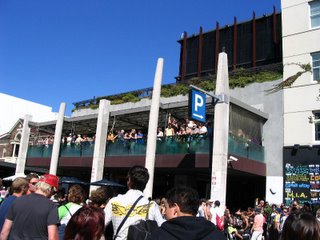 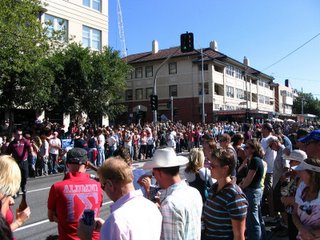 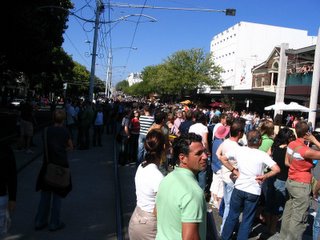 Yeah, that time of the year again. It was quite different for us this year. I have not missed a Pride March. Just co-incidently, I have never been working on this day.

We travelled by tram to St Kilda Junction, along with many others going to the march. We walked down Fitzroy Steet and got quite thirsty. There is 'The Saint', a gorgeous little hotel that used to be 'The State Savings Bank' on the corner of Canterbury Road and Fitzroy Street. We slaked our thirst there and then at quarter to five realized we need to get a position to watch the march. The last couple of years we have watched from the Junction end of Fitzroy Street and then followed the crowd down to Catani Gardens.

This year we watched from opposite The Prince and we left half way through the march and met up with dyke friends at Street Cafe. How trendy. I really don't like the Fitzroy St cafs, but we had a lovely time alternating drinks, chips, dips and bread. It cost a bomb though.

We went over to Catani Gardens for a little while. Ran into nobody. Why don't we know anyone anymore?

We ended up at a place next to Street Cafe for dinner (just remembered, it is called Superbo), for some overpriced food and an owner with attitude. I did not mind the high cost of the day, around $80 each for food and drinks because we had such fun, but really, Fitzroy Street is truly wanky.

Pics are a couple of crowd shots, the balcony of The Prince of Wales and the courtyard of The Saint.
Posted by Andrew at 10:58 pm