Exercise and the gestapo 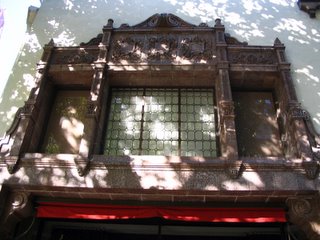 Often after work, I ache to walk. I need to free my joints and breath almost fresh air. In that mood, I could walk long and fast. But today I did not walk far. There is some tram track works happening near us so I though I would just have a squiz at what they were doing. I also wanted to photograph some detail on the Royce Hotel. R came with me and while we were on the correct side of the tape where the major works were happening, we were in an area that pedestrians would not normally be.

Oh, oh. Here comes security/traffic controller. I will stand my ground. R will get angry, storm off and lecture me afterwards.

'Would you like to get closer and take some photos?' she called out, having noticed the camera in my hand.

'Um, no, not really here to take photos. Just for a look at what the work is.'

'Well, come in closer and have a proper look', she insisted. So we did. It wasn't very interesting, just some boring concrete, steel rail and some holes, but it was nice to be invited.

And here I was thinking that I being a threat to national security. We thanked her and left.

Nice bit of architectural work though hey? Can't say quite the same about the photographer's skill though.
Posted by Andrew at 9:07 pm