In Memory of Juanita 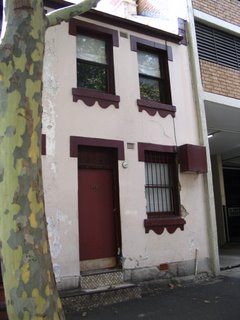 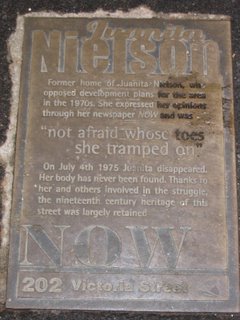 I have mentioned Juanita Nielson somewhere before in my blog. She is somewhat of a hero(ine) of mine.

She was rich and yet lived in this modest house in Victoria St, Kings Cross. She loved 'The Cross' and the larger than life characters who frequented it.

She led a campaign against property developers which resulted in the Builders Labourers Federation (Green Bans) placing bans on demolitions in Victoria Street.
The campaign was successful and the streetscape was saved but for her trouble, it would seem, she was murdered, perhaps by those with vested interests, and may have ended in up a building's concrete foundations.

While I do know (of) some passionate activists, the numbers are not what they used to be. Get off your arses and protest.
Posted by Andrew at 3:38 pm