"And I leapt for the ball and my hand landed on an upturned broken stubby in the garden. I was at Box Hill hospital from 8pm until they saw me at 3am."

Sorting out the world

What we know as staying up too late, having too many drinks and talking a lot of ***t is actually called something in the UK.

When criticism comes from any person the next morning or the question arises as to whether we enjoyed the night before, the response is (say it to yourself in an almost rising and falling Scottish accent), ah yeah, we sorted the world out, did we not. A few drinks and we got it sorted.

The previously mentioned statistic regarding the amount of alchohol that English women consume, seems to be quite true. In fact R's sister has someone elses share as well. It is almost a daily trip to the recyling room. Ah well, as the famous bearded media person resident is away, there is plenty of room for the empties.

The sister and bro in law are very nice and we are all getting along well. We have done heaps of stuff with them and proudly shown them our city and its surrounds. They have met our weird collection of friends and particpated in barbies and meals etc. The time has absolutely flown past. Next week Sydney and the following week they leave. Five weeks gone just like that.

There are few things that we have not done and won't fit in which I would have liked to have done. Phillip Island being one, along with Cape Schank amd Portsea. Dinner in Lygon Street another. Bridge Road shopping. Victoria Street, Richmond. Vic Market and the Esplanade Market. But they have and will have seen quite a lot.

They know that the 72 tram takes them to Prahran, along with the bus. The 16 takes them to St Kilda and they can catch any tram home from the city except the number 1 or 8. I would have never known that we live near stop 22, but I had to find out for them and it is now burnt into my brain.

Tomorrow I am not working and we have packed them off on a bus to do the Great Ocean Road. Friday we are doing Puffing Billy and Healsville. But peace and quiet time tomorrow. Nice. Just hope R is in a good mood. He has been very snappy since their arrival. Stressed a bit I suppose.

Just a casual observation, it is a long time since I have been around women when they are getting ready to go out. Boy does it take them some time to get ready. I have known drag queens who can do the lot in less time.
Posted by Andrew at 2:31 pm No comments:

Present list or highriser has entered the 21st century

Four Winds by Bryce Courtney. Already got it and read it and it is a good read. I accepted it graciously and did not say anything.

Tennis raquet, two balls, head band and wrist bands (sweat mopper upperers are useless to me. As soon as I start sweating, I will stop playing). R got the same.

R got a kite. A bloody big kite. This will be fun down the track.

O/S visitors bought us a dvd player. I think most Tebetins in yurts have a dvd player. We must be the last household in Australia to get one. Good for looking at photos on cds. Our only dvd was a gay movie, so we could not watch that, but I had some vcd movies to use to find how to work it. Sadly it does not play .wmv, .rm, or .mov.

But I am pleased to have the dvd player. I feel kinda modern. It is a nice shiny silver and very thin. Sansui. Our sound system used to be Sansui. I liked it but god help me if I want to find their web site.
Posted by Andrew at 2:56 am No comments:

Drove to Geelong to sisters and her girlfriend's for c mas dinner, drove home, went to work. No drinkies for highriser of course, but I did try a no alcohol Cooper's beer. Very good really. Made under license to Carlsberg I believe.

Bonus, nephew's 20 year old mate who was there has lost weight and blonded his slightly red hair. He is now quite attractive and speaks ever so much better than my nephew. Hmmmmm. Although presumably straight, he seems to like R rather a lot. Must be looking for a daddy figure.

Joke of the day was how badly sister's surgeon g/f carved the turkey.

It was a very nice day spent with family.
Posted by Andrew at 2:43 am No comments: 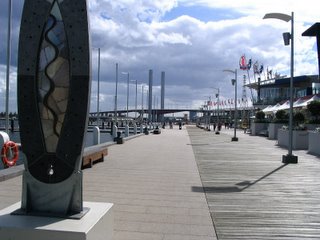 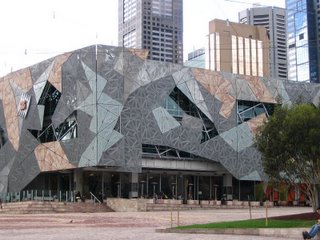 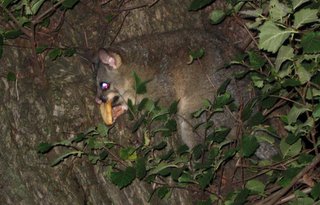 I am unused to not working on c mas eve, but this one I was not. Early rise but feeling a little hungover from evil whisky the night before. Push everyone to get up and get showered. We need heaps of stuff and need to take the car to the local shops. Give building manager and his wife c mas payola on the way out. Bugger, car nearly empty of petrol. Stop at cnr Punt and Commercial. Fill up. Remember to use discount docket. Park at metered car space at 9.43. First ticket machine broken. Try another. Shove two dollars in. Expire 11.23.

Go to Red Orange for half price breakfast. Go to electric bank. Go to Uncle Bucks for c mas gift tags and $1.75 photo frame for stepfathers gift. Go to Dans for c mas supplies. Unload at car. Car park super busy with cars cruising for a space now. Go to Coles to check ham price. Go to Safeway to check ham price. Go to Coles to buy ham. Go to market to buy pointsettia for Ma. O/s bride needs buy surprise gift cufflinks for husband to be. Check jewellery shop upstairs at Pran Central. Only female jewellery. Return to car as ticket expires and extend another twenty minutes. Send off R and sis in law to Cash Converters to find cufflinks. Stay in car. Second ticket expires and we are over the two hour limit. Parking officer approaching. Call R. He is nearby and cufflink mission accomplished. Terrible jam of cars in carpark. Escape down Greville Street.

Home, listen to lovely c mas message on answer machine from Brighton Antique Dealer, coffee, nap. Off on tram to Docklands via a photo shop. Too cold, too windy, too souless. Return to city on City Circle tram. Go to Transport Bar for a couple of drinks then home. Barbecue dinner. Watch the news, something about pigs and The Bill. Go off on foot to Fawkner Park and feed apple chunks to some possums. Notice they are mostly brush tail possums, not ring tail. Return home, watch the rest of Carols by Candlelight. Bed.
Posted by Andrew at 8:45 am No comments:

Andrew
Melbourne, Victoria, Australia
I live in a highrise apartment building in inner Melbourne, Australia on black fella Boon Wurrung land with my male partner of 42 years.. My interests are varied but top of the list are old buildings, history and public transport. I love blogging and blogmates along with connections with people. My email is andrewhighriser at gmail.com