The poor old thing is going to be pulled down. I am not greatly fond of sixties architecture, but I liked the old hall.

I only went there twice back in the early eighties. Once was to a rally organized by Friends of the ABC over, wait for it, budget cuts. A woman, intellectually superior to me, tried to pick me up at the drinks and nibbles afterwards. Quite attractive too she was. Maybe she had money? Maybe I made a big mistake in rejecting her invitation?

After my second visit to DB Hall I would probably have been locked up, not allowed to contact anyone, interrogated and an ASHIO (sic) file would be started on me if it was today.

It was a rally to support Fretilin, the terrorist organization in East Timor that was fighting for independence for East Timor.

So, I was a supporter of overseas terrorist organizations and now I could be locked up for it. I hate you Howard and all you stand for and how you turned Australia into paranoid, screw the worker, ignore protocols and Westminster traditions, take from the poor and give to the rich bastard of a place. If there was anywhere better, I would emigrate.
Posted by Andrew at 11:31 am 5 comments: 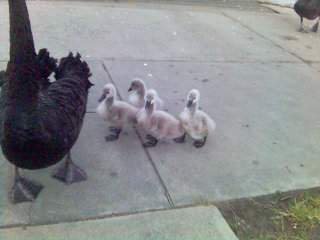 Who doesn't like a nature pic of some cute and fluffies? Yes, I am not very good with a camera phone.
Posted by Andrew at 10:26 am 2 comments:

These things come in lots hey.

Last car service, I was told my timing belt needed replacing. While it could last for a long time yet, if it fails, it can do some damage. I would certainly be without the motor for a time. There has be an ignition switch problem for a time, along with a heater tap problem. Last straw is the air con is not working properly. It is probably a blown seal. But after working, hot, sweaty and grumpy, it is nice to get into a chilled car for the trip home. After working for getting close to thirty years, at least I should be able to have a cool car to drive home in. So I will have to pay a lot for the car maintenance.

We bought a new fridge.

I bought some bike tyres and tubes.

We have yet to pay for the oven door repair.

I have seen rather more of breasts lately than I am keen on. It started on Derby Day in Hawthorn when a couple of girls, and girls is the very much correct word, passed me nearby with minimal horse racing clothing. The had obviously found a supply of Hollywood Tape. In spite of me not looking, I could not help observe how firm their breasts were, kinda like I have seen on sex changes who have silicon impants. If they stayed like that, small and firm, I could almost like them.

Come Cup Day, and there was a drunken woman staggering along Swanston Street with her equally drunken male companion. Now if ever a bloke needs to stay sober and look after his female companion, it is at horse racing events and the aftermath. She was probaly in her thirties. She bent over to do something with her shoe and, and full credit to her for still having her shoes on, her ample and kinda loose floppy breast fell out. Without a fuss, she stuffed it back it in. Well done honey. They may be a bit saggy and you may have been a bit drunk, but you kept it together, just about.

As I may have mentioned, the service man who attended our oven had a look at our fridge at my request. He felt the compressor and said it was too hot. I told him it was running excessively and it was very noisy and he said it needed replacing. Great. Just what we need. A six year old fridge is no good. Because of the noise issue and the overseas visitors sleeping close to it and the thought of how much electricity it is using (and the cost of a new fridge means that R will stop banging on about plasma tv and home theatre for a while), I thought it wasn't a bad idea to replace it. R did some good ground work. I called into Retravision in Chapel Street today and they had a bargain. 420 litre Kelvinator/Electrolux fridge, delivered and the old one taken away, for $999. We went tonight and paid for it and it will be delivered tomorrow. We were catching the bus home and thought, ah to celebrate, we will stay on the bus and go on to Crown and have dinner there. We stayed on the bus and had a great meal at Margots in Crown. It had slipped my mind that today was Oaks Day, so it was quite busy with more drunken women.

There were breasts everywhere I looked. I am not interested in breasts really, but I just could not help but see them. In contrast to the teen hard firm teen breasts I saw on Derby Day, a female only ten years older, in her mid twenties, had these jiggling breasts. They sort of flopped around like loose fat.

Breasts are a funny thing. I will leave them to you straight guys who no doubt know all about them already and are laughing at me at my ignorance.
Posted by Andrew at 8:22 pm 2 comments:

I recently heard that a treatment for hayfever is to eat honey made locally, that is, in your area of town. It builds your resistance to local pollens that cause your hayfever reaction.

I used to suffer terribly from hayfever but sometime in the early nineties it pretty well disappeared. If I still suffered badly, I would give this honey eating idea a shot. It sounds quite plausible.

A couple of hours after hearing this, some electrical impulse shot from one side of brain to the other and I remembered that in the early nineties, I bought honey from a work mate. He lived only a couple of kilometres from my workplace and kept bees and made his own honey. Over a year or so, I guess we bought five jars. I got sick of it crystallizing and having to heat it in the microwave to clear it, so we stopped buying it.

The time roughly co-incided with the almost ceasing of my hayfever. While it is hardly proof of the theory, it would be well worth a try if you are a sufferer. Believe me, I know how bad it can be.
Posted by Andrew at 4:12 pm 2 comments:

Gambling is bad kiddies
Posted by Andrew at 11:39 am No comments:

I object to paying for many things, but most I will wear. There are a couple I object strongly to.

One is publicly funded child care for families where both work. We seem to pay in both Federal and State tax and then council sticks it hand up as well. No, lady, stay home, bring your kids up properly. I have never heard so much nonsense as having children and then paying someone else to look after them. Why have them in the first place? If you really don't care enough about them to stay home, then why expect us to pay as well? If you have to work, then the bloke should stay home. A good flow on effect is that the price of property will drop and become more affordable for all. And if a mother spent a bit more time with her children, she may just not tolerate the appalling behaviour of some of them, and instill a bit of decentness into them.

I am not heartless enough to suggest that the poor ought not have decent housing, but bay views on Beaconsfield Parade and Upper Esplanade and Williamstown? Nah, it is not right that they occupy such expensive real estate. How many more people could be housed by selling these off.

Now why has City of Port Phillip building rooming houses for single men on prime Balaclava real estate? My rates at work in ways I don't like. Housing for the poor is State Government business, not council. Neither the state or federal governments are going to come with any money if the council starts doing it.

While I know some old people who did worry about where they would live and what would happen to them when they were old, I also know too many who just drifted and thought their wages were to spend and everything will be looked after for them when they are old.

The world and Australia has changed and sorry, but you are being driven away from the very expensive real estate that you occupy. It is a hard life, but it is also hard for people to go without when they are younger so that they do have something for their old age. Your lives of total self indulgence have consequences.
Posted by Andrew at 8:40 pm 1 comment: 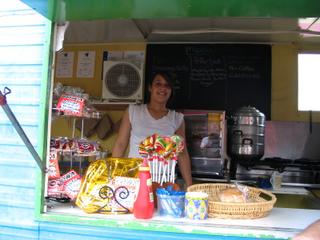 It is very naughty of us adults to have favourites, that is favourtite children, favourite nieces etc. but I cannot help, and nor can R. adore my favourite niece. I think she is just thirteen, attractive, clever, very social, charming, loving, good sportswoman and an all round great kid.

After a 4.30am rise, the pic is of her in her mother's food caravan at the Frankston Sunday Market. She can competently do all that is required in the van, pack it all up, including tables chairs, umbrellas and stands at the end of the market.

Then she wowed me as she guided her mother in the car to hitch the van onto the towbar, and then hitched it herself, folded the jockey wheel out of the way and put on the safety chains.

Her maternal grandmother has said about A since she was five years old, she has been here before. I believe that to be correct.
Posted by Andrew at 8:32 am No comments:

I really could not afford to lose an hour's sleep last night, but then even more time after work taken in reseting clocks.