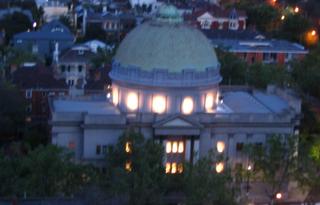 I think it is Jewish New Year, so a happy belated new year to Jewish peoples. Here is my local synagogue alight for the occasion. From ground level, it is a very imposing building. I used the night setting on the camera and the picture is considerably better that one taken at the same time on 'auto'.
Posted by Andrew at 12:16 pm 4 comments: 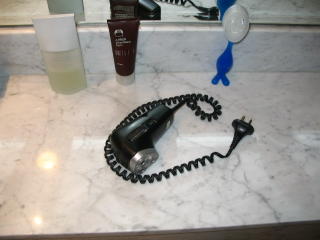 You are halfway there I think Philishave. Another thirty years and you can probably gracefully retire. Thanks for your company every morning and some evenings. We have travelled a lot together, in fact we have been inseparable and you have never let me down even though you see me at my worst first thing in the morning. Sorry for the odd occasion I have used blade but it was for an important occasion and I needed an exceptionally smooth face. But for day to day stuff, you will do me fine. Cheers mate.
Posted by Andrew at 10:15 am 2 comments:

The NSW government has announced fast tracking of new trains so that by 2010 all Sydney trains will be airconditioned.

For once, Melbourne is pretty well ahead. Sydney transport, ever interesting.
Posted by Andrew at 9:37 pm No comments:

I really thought that I had seen everything that motor car drivers, who find driving so boring and easy, that they have to do many other things at the same time. But I takes me 'at orf to the young lady who managed to turn into Toronga Road from Malvern Road in morning peak traffic while in one hand she was holding her bowl of cereal and milk, complete with a sliced banana. I can still be impressed.
Posted by Andrew at 9:27 pm 3 comments:

The movie was The Poseidon Adventure (2005). It was truly execrable. I just wished at had sunk straight away and they all drowned immediately and umpteen million dollars would not have been wasted and nor would my time.

There was minor nation between two large nations, metaphorically speaking. They all used the same language, well kind of. The original big nation to the left had their own way of using their language and the big nation to the right had their way of using the language. They could understand each other, but allowances had to be made. Both were quite clear about how their language should be used in their country.

Most of the older people of the little nation who were taught the left nation way of spelling and speaking have now become thoroughly confused by the influence of the right nation.

I am one of such people, one of the confused. I was not sure how to spell rationalise or rationalize. I have stopped spelling jail, gaol. I have conceded to spelling our political party Labor. I no longer spell program, programme. R, with his left nation heritage even tried to tell me that programme was right nation spelling. I was getting along fine with a net friend in the US until he queried why I spelt toweling, towelling. How rude.

Can't we just consistently use one way? This is the little nations way of spelling it.

While this site below is useful, it does not say what is right for the little nation. I don't want to hear the spelling I use is an acceptable alternative. I want to use the correct one, except we don't have a correct one.

http://www.xpdnc.com/moreinfo/orlabour.html
Posted by Andrew at 9:06 am No comments:

"Look down at the trams gliding past", said the ad for an elevated property in Dandenong Road. On the quite new and well constructed track in Dandenong Road, they may very well glide past but where I live, they grind, squeal, thump and rattle past.

It is rumoured that some state politicians have moved from the street front of Parliament House to further inside to get away from the noise of the trams squealing as they turn from and into Bourke St.

It does not worry me much, as we have thick glass. There are some areas where the din must be intolerable, such as The Esplanade in St Kilda.

While the old trams make a different noise to the newer ones, I would not say that one is noisier than the other. But really, old motor cars were noisy, new ones are not. Why can't tram design move ahead in a similar manner?

This was written a while ago and saved for a rainy day. It rained today, so I publish it with the update below.

I have not been on a country train for sometime. The last time was a few years ago when I caught a train to Murchison East and transferred to a V Line bus to go to wherever.

It was the most relaxing journey I have ever been undertaken. Both the train and coach were wonderfully comfortable. Both were smooth as silk and whisper quiet. It was almost a floating sensation. Why would anyone want to travel any other way?

But today I read in the newspaper that our new and fast country trains are too noisy and have to be returned to the factory for some extra insulation. It is believed that they can create a noise level in the interior of the train of up to 80 decibels. Not being a sound engineer or audiologist, I don't know what that compares to, but I have a good idea of what 90 db sounds like. The sound is likened to that produced by an old Tait train, a red rattler. They were noisy, very noisy.

Just another backward step for public transport.
Posted by Andrew at 11:39 pm No comments:

All care and no responsibility. Somehow I have become involved in the Master Plan for Fawkner Park. While it is very worthy, I have done so for totally selfish reasons. I want the park to work better for me. I want the sporting fields rationalised, a paved western walkway, and a water feature. It is a ten year plan and you can find it buried somewhere on the City of Melbourne's website. The result will be a real improvement whether I have my way or not.

I am just waiting to be challenged as I am a City of Port Phillip resident and Fawkner Park is City of Melbourne, though I do live in Melbourne. As my street is the only street in Australia with it's own post code, one would think that it might have it's own name.

The confusion of where I live is difficult. If I wrote a letter to a newspaper and signed it as Andrew, Melbourne, straight away I am thought of as city resident. I am not. I takes me at least ten minutes to get to the city by the fastest means possible (which is probably a bicyle).

Yeah, I need a better address to locate me.

PS I have now received a copy of the proposed plan and I am not going to get a water feature, but possibly public art. The western walkway will be properly made and a mininmal rationalisation of sports fields will occur. There is some good stuff happening.........but over a long period.
Posted by Andrew at 8:47 pm No comments:

Many, many years ago a son indicated to his mother that he would love to buy a property, a house for himself to live in. 'But it is so difficult to get the money together for a deposit', he lamented.

'Son', she said without humour and quite straight faced, 'you must know about Tattslotto. Don't you ever buy a ticket? Have you not thought of that?'

True story. Not me, but a close friend back then and his mother could afford to help him. Although white, she was brought up in Rawalpindi in what is now Pakistan and had some strange attitudes.
Posted by Andrew at 11:19 pm No comments: 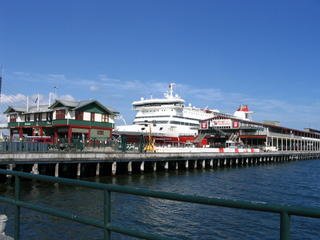 Station Pier in this pic looks to be on a very human scale and even friendly. But folk don't think so. I watched for a while and many people who were there approached the entrance where security guards were stationed with much trepidation. Some even approached and then decided against it. There was no reason why they could not just walk in and a couple did just that. I went in and took a couple of photos. There wasn't a sign to say I couldn't.

For a better view of the building, click the pic.
Posted by Andrew at 11:37 am No comments:

I expect playing the racism card could be quite effective. In my workplace I have seen it played to good effect. I played the homophobia card once. It was quite a long time ago when we lived in East Malvern, that middle class bible bashing stulifying suburb.

Our home loan needed some serious adjusting, so we went to the bank manager. We knew him and he was an ok bloke, but unfortunately on holidays when we visited. We had to see the assistant bank manager. He was quite young, immaculately groomed and dressed and had a very professional attitude. After some time he came back with an answer to our request. It was going to cost heaps. It was totally wrong and I was furious.

I wrote to the head office of the bank and a couple of days later, we had a phone call from the bank's area manager requesting that we meet him at the area headquarters in Burwood Road, Hawthorn. Some of you readers may have guessed that it was the ANZ bank and in Hawthorn they had a drive through bank. That was the area headquarters. The area manager was an older person, very pleasant and quickly sorted out the problem to our satisfaction.

So what did I put in the letter? I really can't remember very well, but it was something along the lines of 'I can't help but think that the banks offer was totally impractical and from there I am thinking that the bank has some issues when two males in a partnership apply for a loan or wish to alter their present loan.' Actually, I am sure that is not what I wrote. I think it was probably more subtle. But I did play the homophobic card to good effect. I am unsure if it was homophobia or just a stupid kid in the bank who had a bit too much power.
Posted by Andrew at 4:07 pm No comments: