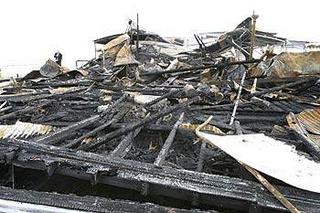 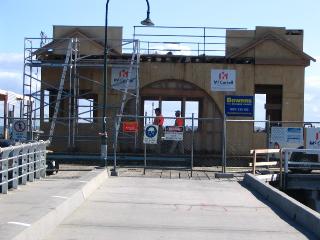 I am not what is know as a great sleeper, so it wasn’t unusual that I woke up at around four o’clock in the morning. If it is not going to be blazing daylight when I have to awake, I don’t bother closing my blind. September 11th was one such morning when I had to be awake at a reasonably early hour, so my blind was pulled up.

When the blind is up and I wake during the night, I look out the window for reassurance that all is well with the world. My reassurance comes from a bright blinking light house, probably at Ricket's Point. If the lighthouse is blinking, the world is ok and I can safely go back to sleep.

Maybe some sirens disturbed my sleep that night or maybe I just woke. I could see flames. High flames. I could not see the lighthouse as the fire was too bright. I knew something bad was happening. Just a minute or two later, I could see flashing emergency lights.

I woke R and he looked and he uttered, ‘Well, this will be on the news in the morning’, and went back to bed.

It was in the direction of St Kilda. I thought it was either the Palais Theatre or the St Kilda Pier kiosk.

The flames soon disappeared but the flashing emergency vehicle lights continued on. I could not go back to sleep. The radio news did not give me any information. As daylight broke, a pall of smoke hung over the pier. I knew then. But two years later it is well on the way to being recreated. I am pleased. I liked the St Kilda Pier Kiosk.

The pics are as it was, the ruins and the rebuilding progress.
Posted by Andrew at 10:05 pm No comments: 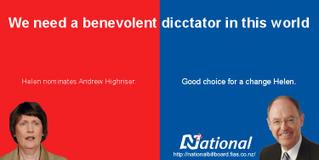 It amused me for a couple of minutes.
Click the pic to read it. I have already corrected one spelling error once, I can't be bothered doing it again.
Posted by Andrew at 7:02 am No comments: 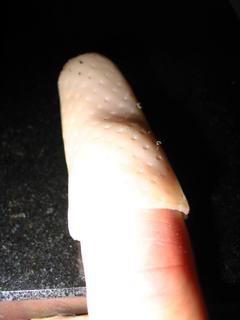 Five days to go and I can take this blasted thing off my little finger. It must be around eight weeks that I have had to wear it. It has done the job required. Interesting that I will have seen a surgeon three times and he just looks and nods, while the Occupational Therapist, who I have seen five times, has done all the hard work. She ought to get a pay rise I think.
Posted by Andrew at 9:59 am No comments:

It must be a few years ago that we went to the inaugural Cake Bake Off fundraiser. It was probably a fundraiser for ALSO. It was hosted at Dukes or was it called The Duke, a failed attempt by Melbourne's iconic gay venue operater, Ken Payne. Miss Candy, resplendant in red gingham was the host, and we declined the 'cookies' that were brought around

While in the intervening years at has been held at DT's Hotel, last Saturday, it was at Zinc Bar, at Fed Square. It was a bit dissappointing. I imagined that the reason for moving it to Fed Square was because it was too crowded at DTs. We went once and it was so busy. There was a reasonable number of people at Zinc and people came and went, as did we, but not crowded as I expected.

The live cake decorating was a hoot and generally, it was a good atmosphere. The rare times that we go to gay venue, we notice that we do not know anyone, even by sight. It was not the case this day. They were many familiar faces.

While none of the cakes looked enticing to buy at auction if you wanted to satisfy your hunger, they really were works of art. Btw, how many out gay cops are there in Melbourne? There were at least half a dozen of both sexes there.
Posted by Andrew at 9:09 am No comments:

Do you get annoyed by 4wd vehicles? Do they block your view? Do they try to intimidate you? If you can't beat them, join them. I think there may be quite a drop in the market for gas guzzlers. These over large, unecessary and ugly vehicles may become history. That has got to be a good thing hey?

Some stats I would like to see:
The figure of new car sales of 4wd.
The rise in passengers on public transport.
And from left field, the decrease in lost, tampered with and small items stolen, and misplaced baggage since the Corby trial.
Posted by Andrew at 8:23 am 1 comment: 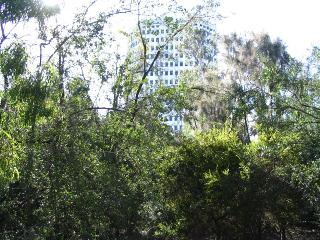 Taken from near the Junction Oval.
Posted by Andrew at 11:00 pm 2 comments:

use you embarrass
why wife purpose
corner immediate

I dislike spam, but it does not bother me much. I just delete it without reading. I do have one yahoo email address that never receives spam. So when a spam email arrived, I thought I better look at it. I am unsure what it was selling, but the text above amused me. Apart from a link, that is all there was.

I wonder if it could mean 'Embarrass you(r) wife, use her purpose corner immediate(ly)'

Sorry, I am not interested in women's 'purpose corners'.
Posted by Andrew at 10:33 am No comments:

Most cities around the world have smelly buses to transport local inner living folk around their city. In Melbourne we have trams. I think we are quite lucky to have them, but they could work so much better.

Our tram company boss is leaving and in print he has made a point of slagging off the Public Transport Users Association. I am unsure why, but he has said that our motoring organisation is more coperative than the PTUA. When pressed on the wireless, he became very political and fudged it. A spokesperson for the PTUA called the wireless station and argued in a very reasonable manner.

I have met this tram company boss in a situation that was quite meaningful to me, no matter how much I rolled my eyes. My thoughts of him went from being an ok public performer, prepared to promote his company and tow the government line and along the way, maybe making public transport better, to being a totally insencere person who was looking for the photo opportunity.

I am pleased that the PTUA fight for better public transport and don't get too close to government and private companies. It is a hard fight. I have seen so many dollars spent unwisely on public transport and so little to make it better.
Posted by Andrew at 10:59 pm 2 comments: 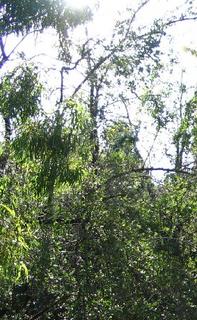 It is nice to get out into the bush, except I haven't recently. I took this pic just two kilometres from home. The pic is a crop from the full sized pic. The the full pic tomorrow and it should be fairly obvious that it is not the bush.
Posted by Andrew at 7:59 am No comments:

I don't have much gas

Petrol is very expensive and I need some. When I am not working, I don't use my car but when I am, I need petrol about every third week. The last time I filled up, the dial went to $50. This time it will be $60 I think. Although I always do this stupid supermarket docket discount thing, it must be starting to be a significant dollar discount. When having lunch with a friend on Friday, she asked me if I knew exactly why it was so expensive and about OPEC. I muttered something about China, supply and demand, it is private business and they will make as much money as they can.

But really, I did not have the answers and promised her a reasonable answer next time we meet. If you can put it in a few words, I would be grateful. Otherwise, I guess I need to do a little net searching and reading.

25 per cent off Country Road towels at Myer. Sorry, bargain finished yesterday. You are too late. O/S rels are coming at the end of the year and we need more towels. $275 spent just on two and a half towel sets is astonishing. And that is after 25% off. I like nice towels. Ta Mr Mastercard but they better last a long time.
Posted by Andrew at 8:06 pm 2 comments: