Sight of the week #1

Nothing odd about that, except she was towing a very large boat on a very large trailer behind her. It was the sort that should be behind a massive four wheel drive (that would give them some justicfication for having them).

Last Sunday was Gay Pride March Day. We stop the trams and traffic in Fitzroy St, St Kilda and march or watch and party a little bit afterwards. Quite a number of straight people do too. Whether that is in a supportive way or just for gig at the poofs and lezzos, who knows.

I have been to every Pride March and this was the tenth. I did not make a point of it, it just happened that way. If asked, I would have said it was the fifth. Hard to believe it is the tenth. The first time we went, me without my partner, but with friends, we joined in at a late stage with what we thought looked and interesting group of people. Turned out to be the Prostitutes Collective.

This year we had the support and participation of Princes Hill Secondary School, from Carlton I think. Not sure if I have the name right, but anyway, good on ya guys and gals. Much appreciated and maybe next year it might be Broadmeadows Secondary or even Narre Warren Horth Secondary.

Cyncical old creep that I am, I do get quite a buzz out of Pride March. Organisers fight to keep it low key and just marching groups. No floats, no big trucks with dancing boys, no bare breasted girls. It is quite nice. Fitzroy Street traders do pretty well out of it too. What a great venue is the new Fitzroy Street venue, the Saint, the where Joy Melbourne held their sausage sizzle. I did enjoy your sausage Benny.

What might have spoilt the evening would have been some very pissed queen staggering around Catani Gardens and perhaps bumping into me, but no danger of that. Drinkers were effectively queued, controlled and restricted to an area. Just like baby toddlers are. Our friends that we had to seperate from, I hope understood how thirsty we were.

For Street Party, if it ever happens again, Pride March after event, and Carnival, what is wrong with corralling the whole area and letting in more that one beverage vendor? As usual, I am sure dollars are behind it. Yes, I know about the council regulations, but what use is a gay mayor then? Or a gay deputy mayor, or a greens council? When was the last trouble caused by drinkers at these events?

But Pride March is a good day and I was pleased to be there for the tenth.

While my heart goes out to those folk who still don't have power because of the storm, what about the street lights in Toorak Rd?

Our view is somewhat spoiled by a lack of lighting and surely these selfish people whinging about not having power for four days should spare us a thought. Really, can you believe how much some people complain? I haven't been on to radio stations or written letters or emails, or called the power company about the lack of street lighting, and yet all these people are bleating away about no power.

Hello, you buy a place with trees over your power lines, what do you think is going to happen?

Melbourne had 24 hours of extraordinary weather. It rained heavily and the wind blew strongly. So many trees fell over or were severely damaged. It is very sad to see such an abrupt end of life for these majestic plants. But they are gone and new ones will be planted. They are replaceable...........kinda like humans aren't they.

Posted by Andrew at 7:11 am No comments:

Variety is the spice of life

If you are talking about Melbourne's weather, we should be very spicy. Yesterday it reached 36 degrees, 92F, today it has not risen above 14 deg, 58F. It has brought constant rain all day, which we do need. There is now a stong cold wind blowing and it is still raining. I hate the heat, but if I never experienced it, I would hate the cold. As it is, I like the cold and the rain. I can live without the wind though. Although, a day of of still air and full sun, 30 deg, can feel worse than 38 deg with a hot wind. At least there is a breeze, no matter how hot it is.

We have one of those all in one units now, our third printer. The first we gave away to a friend. It was a waste of money buying the second as it was not much better and it being an Epsom, tried to restrict us in many many ways. It tried to make it difficult for us to use non Epsom ink in it. We gave that one too to friends.

I am increasingly impressed by new technology. It seems much better that the old stuff, more reliable etc. I put our all in one in this catergory. It prints, scans, copies and can fax. It works efficiently and quietly and the cost of ink is quite reasonable.

But a couple of weeks ago, I needed to copy a couple of docs. I put them in, it copied and printed a bit of the first line. I inserted waste paper to continue. Lucky I did. It did this many times as I tried everything I could think of, included closing virus checker and firewall. I downloaded the latest drivers from the Lexmark website. They were huge.

With hardware problems, in the past, I have tried uninstalling drivers and resinstalling them with never any success.

So what, I will waste more time on this machine that I thought was wonderful and is now turning into a huge disappointment.

It is guess only, but I suspect a previous software update that I had installed from Lexmark's update site. If it ain't broke, don't fix it should be all computer user's motto.

Being on a body corporate committee is a serious and responsible position. But it not all straight faced. We do have a laugh.

K said.
All the lift buttons in the remaining lift had been pressed, causing a long delay.

I said.
Maybe we should look at a security upgrade for the lifts in the future.

B said.
Yes I think it is worth looking into (but does that mean I can't change into my bathers in the lift).

I said.
Please continue to do so B. We could do with some funny video footage at the body corp meetings.

B said.
You would need a very powerful zoom.

M said.
B, you can change into your bathers wherever you like but stop pushing the lift buttons.

I said.
B surely needs two hands to get changed. How does he push the lift buttons?

M said.
Stay away from the zoom.

K said.
I don't think B should change into his bathers in the lift!!
I have just travelled in the lift from the 3rd flr with a handsome young man with no top on!
Not a good look, too much for this old lady to cope with!
B, you know, this isn't a beach resort and I want you to refrain from such behaviour - what if I got in whilst you were in the process!!

Posted by Andrew at 5:40 pm No comments:

Last night I watched the premier of Desperate Housewives. How wicked am I? It was ok. There were 2.48 million of us who watched. Probably not bother with it again, but there was nothing on that appealed to my partner. I would have watched a doco about Neville Chamberlain, I think it was.

Back to Housewives. Of course there were many ads and many of them were for 'women's products'. It really shows my age, but I don't like seeing these ads.

I reckon if blokes menstruated, you wouldn't see tampons advertised openly. Blokes just would not submit to any embarrassment that the ads must sometimes cause.

I am bit contradictory, I know. I believe such things should be open and discussed naturally, but really, how can you take these ads seriously? Is the blue liquid ad still around?

Posted by Andrew at 5:27 pm No comments:

Fellas. Hair on your face can look wonderful. I wish I had enough to make interesting designer stubble patterns. A two day growth can look good. Albeit rarely, hair on the neck can look ok.

But hair growing out of the nostrils or ears never looks good. Shave it, pluck it, stuff wax into the orifices and rip it out or use one of those battery operated tools that I would be terrified of shoving up my nose.

However you do it, don’t be seen with hair growing from your nostrils or earholes. 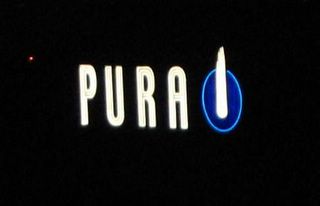 San Miguel make very nice beer. Arguably, one of the best in the world. I like it, along with Stella Artois and Corona. They have made a bid for Aussie company National Foods . National Foods are the producers of Pura milk. I am not sure what beer and milk have in common. From our apartment we look directly at the Pura sign on their head office. This building used to have Jetset Travel as the major tenant and the Jetset sign was a discreet dark blue. The Pura sign is so white and bright, it lights up my bedroom and restricts my view when I am in bed at night. I can only see two flashing beacons in the bay, unlike the five I used to be able to see.