Kiddie in a very nice park 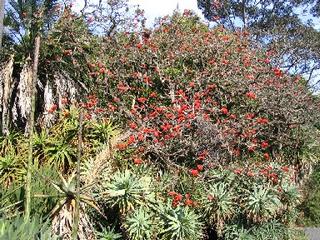 Unbelievable almost, it has taken me the three years that we have lived here, to visit the Botanic Gardens. Today it took me less than two hours walk there, look at some of the garden, have a Devonshire tea at the lake ($9 splutter, splutter), take a few piccies and return home. I was impressed with a narrow walk way that I had not been along before and an open area with various eucalyptus trees. The pic could be a flame tree. I am not sure.

As I was returning home, in a large open grassed area surrounded by shrubbery a girl about the age of six or seven was wandering around. She did not look lost but who she was there with I don't know. Maybe her parents were on the other side of some shrubs, but they would have had to be a long way away. Instinct told me to ask her if she was lost and/or ok. I quickly thought through what the consequences might be. "Come on, we will find your folks". I hold her hand and go to where she thinks her parents might be or the kiosk area where there are staff.

Nah. It is an indictment of myself and society but a strange middle aged man holding the hand of a young girl in a quiet area of the park, and with a camera in his hand would be questionable. Even just speaking to her could be seen badly. Had I been a lesbian girl child molester, no one would have raised an eyebrow.

If it may have been your kid and she was lost, sorry, but I would never put myself in that position nowadays. While child molestation is a serious and horrible crime, how did we get to be like this?
Posted by Andrew at 1:40 pm