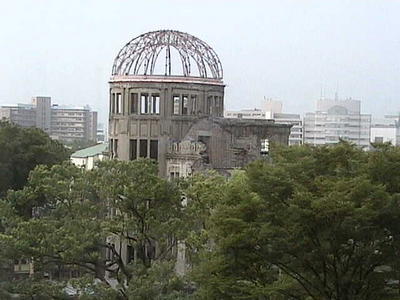 Subject line is poor taste, I know. I could not help myself. But this is serious. Today is the 60th anniversary of the dropping of an atom bomb on Hiroshima. The best that can be said is that it was unfortunate and regrettable. From what I understand, it may have moved the surrender of Japan forward by a few weeks. Perhaps. Opinions vary. I shall sit on the fence as usual.

A few weeks ago someone in a yahoo group posted a link to a webcam in Hiroshima. It is a controllable cam, so I had a play with it. I could see trams running, a park, traffic, a river and this odd but elegant structure pictured here. I emailed this still to my friend in Japan and she told me that it is called the A Dome. It was directly under the bomb as it exploded and most of the force went outwards and not directly down. The building survived and is now a memorial to that terrible day in Japan.
Click on it for a better sized pic.
Posted by Andrew at 7:15 am