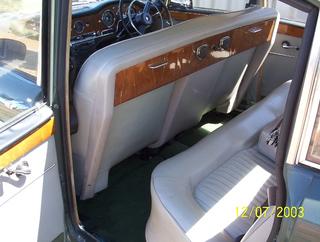 In these time of high petrol prices, I don't miss filling my old beast with liquid gold. But sometimes I do feel a pang for the Humber Super Snipe that I used to own. This is not it, I don't have any good photos of it, but it was the same as this. I cost me $1700 about 15 years ago, plus a new motor for $1200, $400 for new tyres and little else, except for gallons and gallons of petrol it consumed, over the ten odd years that I drove it. Humbers do not take petrol by the litre, it must be gallons, unless they are holidaying abroad on the continent.

It was beautifully comfortable to drive on a motorway at the speed limit, but even with power steering, it felt heavy and cumbersome around town.

It had it's quirks. Strangely the heater was not terribly effective, very odd for an English car. If it was raining and the booster (fan) was on and you stopped at traffic light, the windows immediately fogged up. If it was dry, the car just filled up with engine fumes. So every time you stopped, the booster had to be switched off. Nightmare in stop start traffic when it was raining.

To check the transmission oil, you had to pull back the passenger side carpet, unscrew a metal plate to give access to a short dipping stick. How dangerous is this? The transmission had to be checked with the motor running and in Low gear with the handbrake on.

It was a weird transmission. It had three speeds but during normal driving, it would only use 2nd and top. If you accelerated hard from stationary, it would use 1st gear then. A modern feature of transmissions is that when in top gear, the transmission locks and it is no longer a fluid connection. The Humber had this so many years ago. The change from second to top was a slow sticky slide, otherwise it would have been quite a jolt. The gears were arranged in a different pattern, I think Park was far left, then Neutral, then Drive, then Low, then Reverse. But there was one more position. Push the gear lever forwar when in Drive, then the car would start in 1st and hold 2nd gear for a much longer time. This was usefully in hilly conditions where the transmission would be slipping from 2nd to top and back constantly. It would be guaranteed to overheat the transmission, which did not have cooling like modern ones.

It was a nighmare to service. There were a couple of dozen grease nipples and the engine took eight litres of oil to fill instead the usual average four or so. The transmission took about 15 lites of oil.

Care had to be taken when jump starting it or another vehicle as instead of the usual negative battery terminal going to earth, it was the positive one.

I had the analogue clock repaired twice and then converted to an electronic mechanism and still the bloody thing would fail. And yes, when it was going, you could hear it tick.

Although it had power assited disc brakes, it was so heavy, it was not a fast stopper. I learnt to keep my distance and I don't think I ever had to use the brakes in an emergency. A light application of the brakes was not enough to pressure to operate the brake light pressure switch. Modern cars use a simple contact switch on the pedal.

The wipers were two speed that always made an extra wipe after they were turned off and then parked themselves much lower on the screen than their operational position. The windscreen washer water container was actually a glass jar with a screw top lid and the pump and motor were part of the lid.

The boot light was operated by a mercury switch. As the boot lid was raised, mercury in the switch would run to one end and make an electrical contact to switch the light on. The boot lid often required a tap to make the switch work.

It had two rear passenger lights and one front one that was built into the mirror frame.

The engine was 3 litres and it gave quite good performance.

It certainly was not anonymous motoring and now I prefer the invisibility of a modern white car and air conditioning, but it was fun having the Humber.
Posted by Andrew at 10:08 am