There are a few workmates who are I am quite close to, and although we are worlds apart in some ways, oddly we are friends and I imagine that if I left work, I remain in touch with them. One is Buddhist Chinese Thai, one Christian Chinese Cambodian, one Muslim Indonesian. All are around fifty or close. They have all been workmates for a long time and we know each other pretty well. They know I have a male partner. The Thai has met him several times and given his wife makes costumes for drag queens, it is not a problem. The Cambodian is one of the most clever people I have met, quite masculine and assertive. The Indonesian is fiery, emotional but thoroughly decent.

At various times we have talked about corruption in their countries of birth. It is truly part of life in their countries, from the rich to the poor. Of course, the poorest are the real losers as they seldom have money to pay.

If you weren't brave, with some knowledge of the ways of corruption in such countries, you would surely stay at home, lest your plane crashes, the building falls down around you, or the wheels fall off your bus.

When talking of such matters, in the back of my head is how horrible it must be to try and live in blatently corrupt countries, and probably, I was thinking Australia is not corrupt.

But kiddies, we know that is not true. The company police force, ASIC, was formed in 1991 and it's efforts since have resulted in the jailing of 256 people since then, with more pending.

I consider I am quite law abiding and I like rules and sometimes I think Australia is becoming a place of do what you want when you want. It is not enforcement of laws by the police that keeps our society together; it is just the basic decency and itelligence of most people.

There is some law breaking I like. The type of protester that results in the advancement of society, those who try to preserve nature, the anti war folk, those who fight against cruelty of animals and indefensible young humans and the sort of person who would throw an egg at the Prime Minister because he is what he is.

Merry christmas to all.

I boarded the tram and sat down on a side seat adjacent to a young guy in the homey uniform of the young. I did not take much notice of him and started reading my paper. I don’t mind sitting facing the rear or forward but I dislike sitting sideways, so I was sitting on a bit of an angle but not quite facing the guy.

Ok, I couldn’t help but stare now as the furniture was obviously getting excited. There were plenty of other passengers, but as usual, they remain oblivious to such things and he was guarding himself a bit with his hooded jacket.

After three or four minutes, and I knew this was coming, he made a motion with his thumb and fingers that you would if your were checking that you didn’t have more than one note of money stuck together. Then the open hand, $50, I guess.

Saved by the bell, kind of it. I smiled at him and rang the bell for the next stop, even though I was one stop short. It was the only graceful way I could get out of the situation. He went back to reading his book. In case you think I am completely resistant to such offers, I am not. He just wasn’t my type and although hard to tell under all those clothes, he did not look terribly clean. If I were tempted to pay for it, I would choose someone who was my physical ideal, besides, far too much to do to have time for all that nonsense plus, $50 would keep me in wine for a week or so.

Still, it was a bit of fun for a couple of minutes.

OR, why I don't go to bars anymore.

It seemed like a good idea at the time. Learnt that Transport Bar has a gay theme on Wednesday nights. The advertising said 8 till late. I happened to mention this to my partner and he suggested we should go for a look see. I checked their website and found that they do a nice pie, chips and salad for a reasonable price. I am not so stupid. I knew not much would be happening if we arrived at 8, but as Thursday is a working day for us, it could not be otherwise.

I will just add here that I love the Transport Bar during the day. It is stylish, airy, light, lots of areas and very relaxing.

But as soon as we stepped off the tram, I thought, I don't think we will be eating here tonight. We pushed our way in, peoples were very drunk and loud, the floor very sticky, the openish area to Swanston St was closed for a private function, the music was loud..........it was just too full on. We had one drink and left. To ease the slight disappointment, I suggested we go to Lygon St for a meal, but partner suggested KFC. Perfect, and I refuse to feel guilty for having KFC twice in one year.

We then had a look at the christmas tree in the city square and I had not seen the water wall in Collins St close up at night, so that was interesting.

We came home to find there was an informal body corp committee meeting in progress, so we joined in and after half an hour of chatting and merry christmas wishes, we are home. I am quite happy at home. Just as well, as it costs us a lot of money, but money well spent. A brief visit to a bar just confirms that I like being home. This from someone who ten years ago would have had a tantrum if he had to stay home on a Friday or Saturday night. I kinda like being a bit older; it is a lot easier.

At the last body corp committee meeting, one of the atendees who we think is a bit odd anyway, insisted on leaning back in his chair with his hands behind his head. I suppose there was some body language that we were supposed to read from his manner, but it was hard to concentrate on anything because of his white tennis tee that had very badly stained, yellow underarms. Absolutely disgusting. Lest you think all the body corp committee are like that, I can assure you they are not. 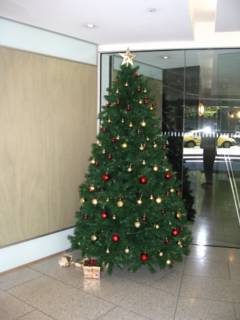 Our building's christmas tree. Bought, assembled and decorated by the body corp committee.

Posted by Andrew at 1:03 pm No comments: 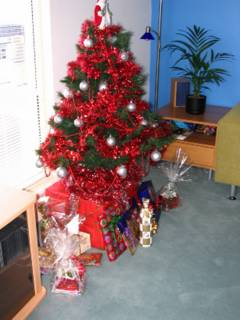 Our own christmas tree. We have decided we need a new one next year.

This idea really amuses me and credit must go to Jane Clifton, comedian, singer, sometimes guest and sometimes presenter on ABC Melbourne radio. I wish someone would do it.

It would be a newspaper of headlines that you can always expect. Here are few examples and I will try to keep it topical.

Boxing day I expect we will rise to a head line, Police say christmas day was quieter than usual.

Charity group has ensured the disadvantaged did not go without for christmas.

In the little weather square, it will say, Strong wind warnings east of Wilson's Prom (I can't spell the full version of prom).

In business it will say, Despite a 50% fall in real estate prices, agents say there is no slump in the market.

An English paper might say, Government minister caught with pants down.

A USA paper, In these difficult times, this great country will put it's trust in god.

Olympic facilities unlikely to be ready.

That's enough to get you thinking. Add a few of your own.

Posted by Andrew at 6:42 pm No comments: