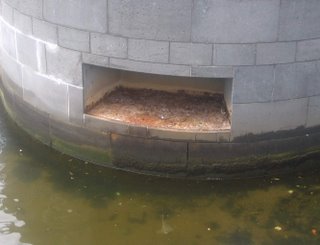 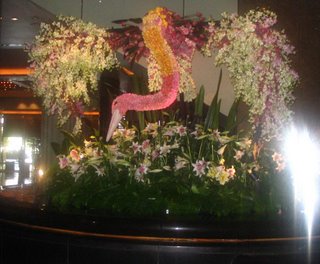 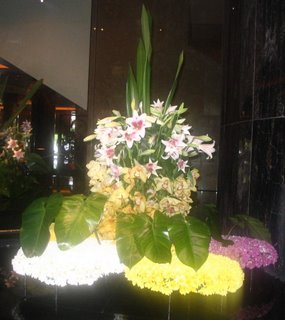 Back to work Sunday, so this will be the last 'tourist in your own town' post for a while.

I needed to go into town for a couple of things, so instead of tram, bus or feet, I walked to the Shrine and caught the Melbourne Tourist Shuttle to the corner of Little Bourke Street and Exhibiton, walked to QV and did what I had to and caught the shuttle again around through Carlton and Parkville, back through the city and got off at Casino to see the flower display. From there I caught a normal bus home.

The tourist shuttle seems to run to time, not that I knew the times of arrival, but I noted four times that the spacing was pretty close to the fifteen minutes. The first bus was probably close to peak time for tourists, 10.55 and it had a reasonable load. The next one was even busier with two lots of people using it as public transport, a woman and a large pusher and her brats and another woman with two brats, a shopping jeep and a cake in a box and almost incapacitated by her mobile phone conversation. The bus that followed that I saw from the Casino later was much less busy.

Total circuit time, 45 mins, service interval 15 mins equals three buses required to run the service. Except, when do the driver's go to lav? When do they eat? Assuming one driver drives the same bus continually and the service orperates from 10 till 4, that is 8 hours plus time needed to get to and from the depot. At any point, the bus can have passengers on it. How can this work? Normally tram drivers get on and off trams near a depot or for buses, sometimes they have a lunch break at a convenient place along the road when no passengers are on the bus.

I did have a bit of a chuckle at the tourist family probably from Asia, but could have been from Australia. The running commentary, perhaps a little loud and the accent a little broad for clear understanding by those who English is not their first language, mentioned the elm trees in Royal Parade. The older male of the group jumped up to look out the window, right next to me. "I am looking at the elm trees," he exclaimed to the group. "I can see that they are some type of eucalypt, but have smaller less pointy leaves".

For you Australians who don't get it, you ought to be ashamed of yourselves. For overseas types, an evergreen eucalypt, aka Aussie gum tree, is Australian and an elm is a deciduous European tree. The are alike as chalk is to cheese.

I don't what this service costs, I guess approaching one million a year and it is perhaps worth the cost. I know Sydney has a circular tourist bus that travels a longer loop I think, and the price is quite high. As a freebie for tourists, the shuttle is ok, but it travels through parkland (looking a bit dry), beautiful, but could be anywhere, sports arenas, there was a distinct lack of interest, city and Chinatown, a useful stop, but not very interesting apart from the theatres, Carlton, looks good to eat at and some ok housing along the way, Royal Parade, a street with nice elms, the law courts in William Street, you can't see much, Casino and high rise apartment buildings. If I did not know the ciy, I would have been disoriented. It also moves along at traffic speed.

When you are paying for free, the City Cirle Tram is probably more fun and more useful. It just travels in a rectangle, left, left, left and left again or vice versa and you know pretty well where you are, and what it travels past is more interesting.

The shuttle commentary did make a couple of mentions of the City Circle tram and it is also mentioned in the brochure.

Almost unrelated, a neighbour volunteers at the tourist information booths, Fed Square, Bourke Street Mall and unbeknowst to me, there is also a booth at Station Pier where the Tasmanian ferry and the cruise liners dock. She is very disappointed to see one day only visitors from cruise ships whisked off to the Dandenongs or Great Ocean Road and never actually see inner Melbourne and the city. She is very pleased when they come up and ask how to get to town and she gets some feedback, invariable complimentary. It is lovely, we will come back for a longer visit.

Pics are of a couple of the Casino flower arrangements and a nice place for a homeless person to have a good night's sleep, so long as they don't mind curling up a bit, wading shin deep and are alert for flash flooding.
Posted by Andrew at 10:32 pm