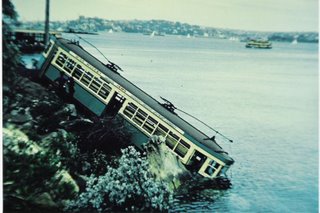 It was interesting to hear the defensive ebay spokesperson today. He was telling viewers and listeners that ebay was not responsible for cricket ticket scalping on ebay. He suggested that the Melbourne Cricket Club was at fault for a poor ticket selling process and allowing multiple ticket purchases by individuals. For me, the jury is still out.

But I did want the book. While trimming down my bookmarks today (I bet you are adding to yours. I just trim mine down) I came across a saved link for second hand books in Australia. I had a quick look. City Basement Books in Elizabeth Street indicated that they had a copy for $20. I went in there and sure enough, they had it and it is in very good condition. Pleasant and helpful service too.

So the net is not always best for buying, except without the net, I would not have known that the shop had a copy.

Curious about the book I bought? Tramways of Sydney. It is a general view of Sydney's trams from the beginning in about 1860 to it's closure in 1961. It was a huge system with many quirks. It could move around 100,000 Randwick race goers at the end of the races in an hour or less. It had a tram direct from within the Supreme Court in Oxford St straight to Long Bay jail. (They certainly did go directly to jail). In 1947 the system took 200,000 to and from the Royal Easter show in one day. Some trams used to have postal boxes attached to receive your letters. There were special trams to carry politicians home after late night parliamentary sittings. Special trams to carry newspaper to newsagents early in the morning. Special coal and sand carrying trams. There was a barge to carry trams across the harbour before the Sydney Harbour Bridge was built. The Balmain tram route had a steep decent to the terminus at the harbour. A counter weight was attached and ran underground to keep the tram under control. As you can see in the pic, not all trams managed to stop at the Athol Wharf terminus.

Unlike Melbourne's trams that pretty well go in straight lines, Sydney's tram lines twisted and turned, went up hill and down dale and even into bush land.

What a loss for Sydney.
Posted by Andrew at 9:29 pm