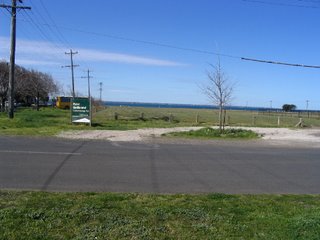 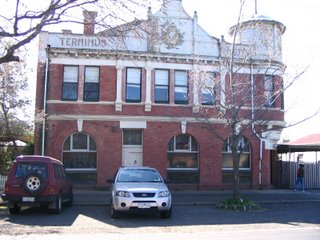 It was not the most pleasant train trip to Willietown, as we had the company of some young loons. They seemed to think it was funny to pretend to be ticket checkers and open their wallets quickly as if that had identification as the above and ask to see peoples tickets. They walked the full length of the three carriages a couple of times, although only asking two people for their tickets.

We felt pretty uneasy and unsure what they may do next. I tucked the bag I had with my wallet, phone and camera out of sight beside me. As they train filled a bit, they settled down but of course their language continued to be heard.

What can you do in this situation? You just sit there, look out the window and hope they take no notice of you. Perceived threat is as bad as real threat, I feel. I really would not be a person to take a train at night to the outer areas on my own.

Nice wander around Williamstown and the market, and the obligatory walk onto the pier.

We sat for coffee at one of many places along Nelson Place. I wish I had taken the name of the place so I could bag them here, but I did not. We sat and waited to be served. A muscle mary with his blonde bimbo arrived and sat near us and they received immediate attention. Ah, the invisibilty of middle age.

I was watching two doors along where a woman was standing out the front of her cafe and greeting passerbys. Ok, we moved there and for price of two good cups of coffee for only $5 we received glasses of water, a table leg chock and a chat. We sipped our coffee slowly as the sun warmed us. 'Bye loves', she called out as we left. We felt good. The menu looked ok and the prices similar to everywhere else along there. So I really would recomend Al Porto Vecchio. But not the place with the red umbrellas two doors along, possibly 179, as APV was 175.

I took the pictures on the way back to the station. The sun was in my eyes, I could not see the screen etc etc, so hence bit of the building are chopped off. The person in front was some charity collector or similar. It was funny, because she would knock or ring a bell, pause for a response, and when none happened, moved on. By the time she had moved to the place after, the door was answered by people wondering who was knocking at their door. The other is looking across the bay to what I suppose is roughly Sandringham.
Posted by Andrew at 8:19 pm