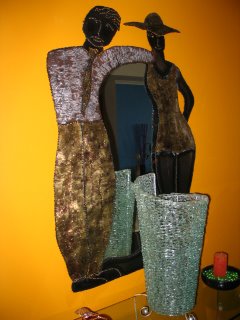 We had a friend who lived in the very short Union Street between Queens and St Kilda Rd. We went to pick him up and take him out somewhere a few years ago and as usual, he was not ready. While we waiting for him, we noticed this metal thing leaning up against a tree. It had the remains of a smashed mirror inside it. We looked at it and thought it was interesting and maybe we considered picking it up and putting it in the car. Friend finally arrived and we forgot about it. But when we returned him to his abode later in the evening, it was still there. We put it in the car and took it home. We shoved it under the spare room bed and every so often we would be reminded of it by stubbing our toes on it's sharp edges. It is heavy grade tin.

Eventually we dragged it out and had a good look at it. Hmm, it could work. We had a mirror cut for it and put it up and we liked it. In the overall context, it does not grab your eye, it is just there, but people do notice it and comment on it. Found it on a nature strip, we answer. We don't tell how much work we put into it.
Posted by Andrew at 12:15 pm