Keeping me out of chat sites, but not necessarily trouble 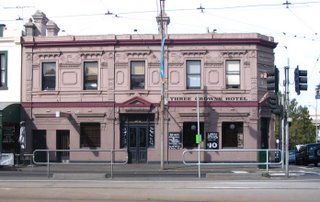 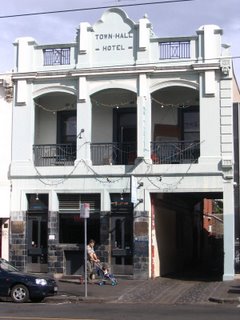 Just a bit of listen to the wireless before sleeping. Older Women's Peforming Circus is putting something on. Hmmm, yeah they are all dykes? and incredibly talented. North Melbourne Town Hall is where they perform. I have not been past there for years, maybe twenty. I will goand have a look at squalid North Melbourne tomorrow. It is an outing and away from the internet and domestic tasks.

I know it is is the 57 tram from Elizabeth Street. I chose the bus rather than the tram to get to town as I was unsure if there was some disruption to tram services due to the Formular One Grand Pricks being held nearby. I know saying Pricks is a bit silly, but no sillier than you rev heads who pronouce one word with a French accent and the other English.

It is only one city block to Elizabeth St from either the Swanston St tram or Queen St bus. I caught the Elizbeth Street tram and fortunately most of the crowd alighted at the Victoria Market.

It was such a short time before the tram swung into Errol St and I was there. I alighted at Queensberry St and walked down the western side of the street. It is not very long but ever so charming. I recall it as a dead shopping centre, but not now. It was busy enough with people but not overwhelmed by cars. There were plenty of places to eat and as it was quite early, the cheap raisan toast and coffee tempted me back to where I left the tram. There were a few questionable types at nearby tables and I caught some 'interesting snippets', while I read, ate my toast and drank my coffee. It just has a wonderful 'village' feel to it.

I walked down the other side of the street and noted that I went past a well known comedy venue, the Comic's Lounge, and the Lithuanian Club and then spotted on the opposite side of the street what I reckon must nearly be the narrowest hotel in Melbourne. I think the Comic's Lounge is part owned by Charlie Pickering who writes a column in one of Melbourne's weekly give away mags. He is the only thing in one of them that is worth reading.

I knew the tram was a few minutes away yet, so I rounded the corner into Victoria Street and noted the elaborate decoration on this much wider hotel.

I was walking slowly and noticed a car pulling up in the left hand turn lane just a bit ahead of me. What? I thought. The idiot is parking so close to the intersection in a turn lane and getting out.

He came straight towards me, an older man, Italian perhaps. Very dapper, including a sharp hat and tie and he didn't have much of an accent.
"Please", he asked, "I cannot find Victoria Market. I have been there many times but I am confused".
"Straight ahead," I advised him.
"Please, you come with me to show me."
"You are in Victoria Street. Just drive straight ahead."
He was very jovial and very touchy feely.
"I am so counfused. Please."

Short of him having a syringe full of a tranqualizer, there wasn't much danger, apart from being driven by an old Italian man, so I obliged for what was a couple of hundred metres I suppose.
You know where I am going don't you. His hand went straight for the grope as he drove. I did not make a fuss for the brief time I was in the car, but once we reached Peel Street, I told him this is it and opened the door and got out. He was effusive in his thanks and gratitude. Jokingly friends have been known to say I have a word that starts with s and ends with t and has an l in it stamped on my forehead. I thought they were joking.

I was a bit dazed as I walked on towards Elizabeth Street thinking I would catch the bus home. No Queen Street is back that way and not sure of where the buses enter Queen St and I just left Peel St, which was where I could have caught a tram almost directly home. Stupid. Not thinking clearly.

Wander on to Swanston Street in a very thoughtful state of mind and caught a St Kilda Road tram home to play with my newly purchased toy. More on that later.
Posted by Andrew at 1:59 pm