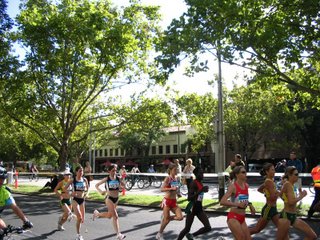 We watched the Marathon runners go past Sunday. I think without exception, they were short, lean and very hard bodied. One female acknowledged our applause and one very black guy grinned at us. The photo is of sheilas coz most of the blokes were dark skinned and did not show up well in the photos. It all happens so quickly, I don't think there is time for the camera to adjust, and not enough time for me to set the camera.

There was a good turn out including from the apartment blocks here and many were hanging over their balconies cheering them all on. It did not matter which country they were representing, including Australia. They all received the same enthusiastic cheering. In the true Aussie manner, the last runners received the most applause and encouragement. We had one Aussie flag hanging off a balcony along with a Malaysian one from another.
Posted by Andrew at 12:41 am