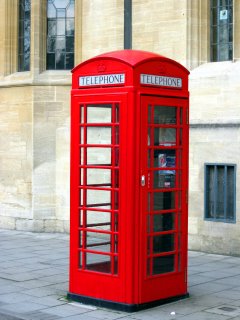 So, Telstra wants to remove 5,000 public telephone boxes. You may think a bleeding heart lefty-there WILL be law and order type like myself would be terribly against it.

Nope, get rid of them all. What happened to all those nice plastic dial phones we used to have? The ones that used to slide around the surface of whatever they sat on as you dialled? I recall a particularly nice olive green model. Give them a scrub up and each poor person can have one and a line to go with it and it can receive incoming calls and it will dial out only to 000 (911, 999, 112 for my many international readers). This is already done for some poor people who aren't in good health.

I am a very modest Telstra share holder and I want big dividend cheques and big growth in the share price of Telstra and if you are going to start whinging about the loss of public phones, then what part did you play in lobbying not to privatise Telstra?

It is as good as a private company now. It is there to make a profit. If the government wants to keep a number of public phones, then get Optus or Vodaphone to take some on. Either that or do as they do now and pay Telstra to keep a number of them themselves paid for by taxpayers. Ha, ha. All telecommunications are private, except for the public phone boxes that are government owned.

Pictures are of proper telecommunication equipment. A phone that dialled. You only dialled once as the number of calls anyone would receive were so few that they were never engaged and there wasn't an automated system when you rang a business. Someone actually answered the phone pretty well immediately. If it all got too complicated for you, you just called the operator and they would sort it out. The red phone booth was insulated. You could hear what someone was saying above the traffic when you used it. It was just a matter of working out when to press button A and when to press button B. Again the eavesdropping operator would assist you.

I think I last used a public phone in about 1992. I have examined them of late though and they are quite sophisticated. You can even sms from them and use your credit card. Plus they look exceptionally vandal proof............still no phone books in them though.
Posted by Andrew at 1:35 am