We could just use the overhead oyster lighting. In the living area there are two, one with two 100w bulbs in the dining area, the other with two 40w bulbs in the lounge area. But we rarely do. We normally use a combination of our electic lamp collection. Sort of the cottage garden of lighting.

This lava lamp distracts me no end. It is supposed to have a coloured bulb in it, but we have decided we prefer a plain one. I love watching the oozing fluid go up and down.

This picture lamp is quite bright and sits above the tv, so we don't use it a lot. The blue standard lamp is very practical and has a dimmer on it. Not much to say about this green one. It is probably my least favourite and was originally bought as a bedside lamp for the spare room. 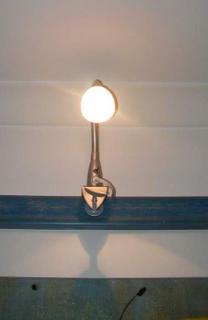 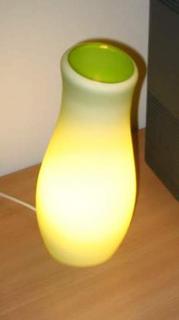 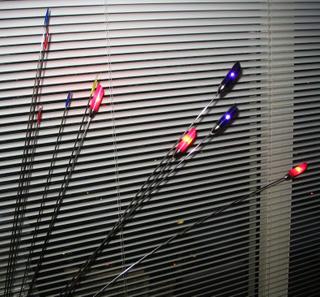 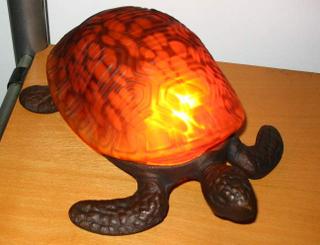 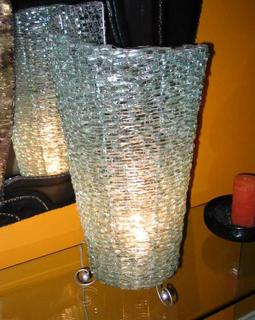 The red and blue shades on the lamp at the window were originally white, but we found them too bright, so we painted them with enamel and fired them in the oven. Then the transformer burnt out and after much discussion with people is shops, eventually Radio Parts helped with advice and the sale to us of an appropriate transfomer to power four fifty watt halogens.

The tortoise was a whimsical purchase. I think it is cute.

The glass lamp is my favourite. It is small pieces of glass all wired together. After I took this pic, I noticed that after two years it was quite grubby, so I washed it and it looks much better. It casts great diamond like reflections around the room. I can't remember why, but I took the electrical part out for some reason and it had been dangerously wired, so I had to rewire it. Somebody! mucked around with the picture and compressed the size and distorted the image a bit. When trying to correct it, things happened. I have spent enough time on this post, so I will just say it stands about half a metre tall.

Hmm, multiple pictures with text has been interesting. Maybe I will get it right next time.
Posted by Andrew at 7:00 pm